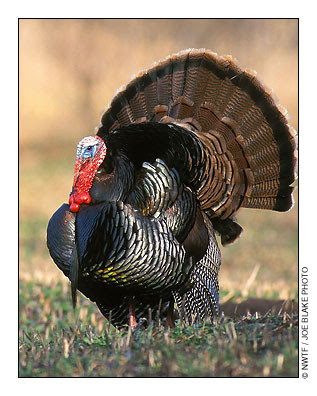 May your stuffing be tasty,
Your turkey be plump,
May your potatoes and gravy have nary a lump.

May your yams be delicious,
and your pies take the prize,
and your Thanksgiving dinner stay off of your thighs!

I wish you all a Thanksgiving filled with family and friends, good food and good humor. Have a piece of pie for me!
Posted by Michele R. Unger at 8:49 PM 1 comment: Links to this post 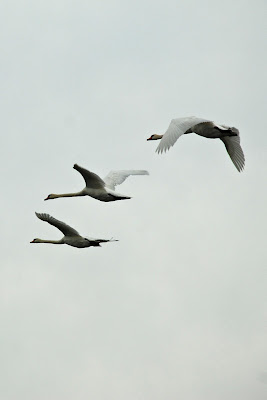 “I had found a kind of serenity, a new maturity... I didn't feel better or stronger than anyone else but it seemed no longer important whether everyone loved me or not--more important now was for me to love them. Feeling that way turns your whole life around; living becomes the act of giving.”~ Beverly Sills
Posted by Michele R. Unger at 2:55 PM 1 comment: Links to this post 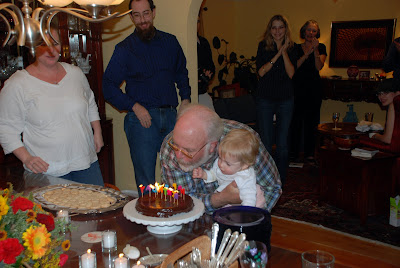 My DH has turned 60 this past week. On November 14th we had a huge family party to celebrate this amazing achievement. Family came from near and far (California) and we wined and dined and DH blew the candles out! I think his best gift (and mine, too) was having our daughters and our son-in-law-to-be home! It's always a party when the girls are home!

Odd to think that we will have two sons-in-law and they are both named Chris.... 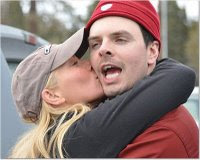 My eldest daughter, Jen, and the love of her life, Chris, became engaged Friday night. Poor Jen tried and tried to call me, but I was at the Great Big Sea concert and hadn't taken my phone and didn't check it when I returned home. She called at 7:45 on Saturday morning and caught me lolling in bed and then passed on the happy news. We are so happy for them both and so very excited to welcome another Chris into our family. Jen's Chris is just the nicest fellow and he makes our girl so very happy. I am giddy with glee over this news!
Posted by Michele R. Unger at 7:12 PM 2 comments: Links to this post 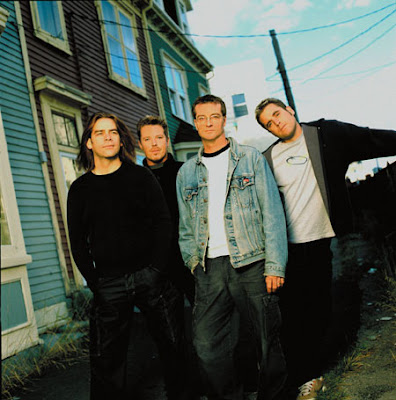 This was one rollicking and toe-tappin' Friday night in Edmonds! One of my all-time favorite bands, Great Big Sea, came to town today and played at the Edmonds Center for the Arts, all of three blocks from my house. Nonie and I went and had front row seats! (I guess it pays to be an "official" fan of the band as I bought the tickets through their website and got these fantastic seats.) From the start to the finish, it was a night of great music, great fun, a lot of singing along and much laughter. I got to hear some of my very favorites, especially The Night Pat Murphy Died and Ordinary Day.

I should be going to bed and getting some rest before heading up to my cabin to face the clean up after the recent burglary, but I'm too jazzed from the concert and I'm bouncing around the house listing to more of my favorites.

If you ever get the chance to see the lads in person, run to buy the tickets. You won't be sorry! 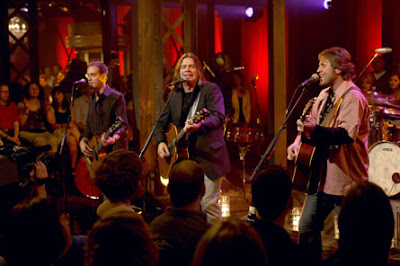 Courtesy MuchMusic // Photo credit: Geoff George
This just in from our local paper, The Beacon.
"A Newfoundland Kind of Night
by David Brewster and Bill Wood for the Beacon
"Okay, so we've all attended concerts where the artists received a standing ovation at the conclusion of a fantastic performance. It happens most weekend evenings at the Edmonds Center for the Arts. But until last Friday ECA concert hall had never experienced a standing ovation at the beginning of the show, nor one that extended pretty much over the entire duration of Great big Sea's amazing concert.
"Great Big Sea has inspired a legion of fans from Canada and the U.S., and these followers, some from as far away as Fairbanks, were in full force throughout the show, singing along with nearly every song, pumping their fists high and dancing in place from introduction to the encore's end. The joy felt back and forth between the audience and the band made for a magical evening.
"The band, formed in Newfoundland in 1993 and lead by co-founders Alan Doyle, Sean McCann and Bob Hallett, performed songs from the full range of their recording career.
"On selections such as "When I'm Up," "Lukey," "Can't Stop Falling" and "Here and Now" the band and audience joined in full-throated song.
"Much of their original material shows the influence of their Eastern Maritime roots-sea shanties and story songs- and the traditional acoustic instrumentation helped put the voices right up front.
"Lead vocal duties were mostly shared by McCann's sweet tenor, which often rang out above everything, and Doyle's baritone, which was appealingly gruff around the edges.
"McCann was particularly powerful in leading an a capella performance of "General Taylor," a traditional from their 1997 album Play.
"Hallet is a multi-instrumentalist extraordinaire, his skills on equal display on bouzouki, mandolin, fiddle, squeeze box accordion, harmonica and tin whistle. Doyle and McCann took turns engaging the audience with banter, improvised ditties and impromptu sing-alongs. the band is ably rounded out by Murray Foster on bass and Kris MacFarlane on drums and percussion.
"On several occasions the band praised the charms of Edmonds and the Pacific Northwest, and it will be hard to forget the power and passion of Great Big Sea's performance last week. We hope, along with the band, for their return in the future."
Amen.
Posted by Michele R. Unger at 10:45 PM 1 comment: Links to this post