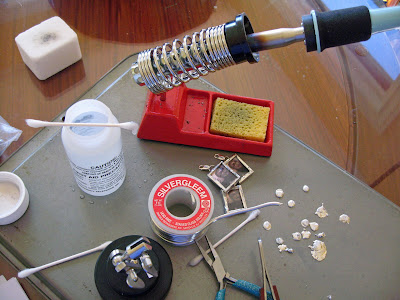 My trip to California was wonderful. I spent the first weekend in San Francisco with Jen. We had fantastic weather---78 degrees on Saturday! Jen joined me at the Hotel Vitale for two nights. Saturday we went to the Farmer's Market at the Ferry Building, then headed up to Marin and did a little walk on the Headlands. It was such a perfect day I can't imagine doing anything that would have been nicer. We had brunch at Jen's favorite spot and did some shopping at a mall and then returned to the hotel in time to meet George for dinner. George had been in town for a series of meetings but stayed through the weekend as it was the start of the Tour of California cycling race on Sunday. George is a huge cycling fan, as is Jen, so they were both very excited about the prelim race to be held on Sunday. Time trials, actually. 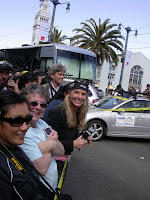 Discovery was right out front. I discovered the my daughter is a HUGE Team Discovery fan. You might even go so far as to call her a groupie....We went out and found that they were indeed right in front of the hotel and Jen took up a position along the tape that separated the exalted cyclists from the riffraff. We stood there for four hours. FOUR hours. Jen took a gazillion photos, as did I. One of the bike techs gave Jen a Team Discovery hat that had fallen off one of the cyclists heads and she 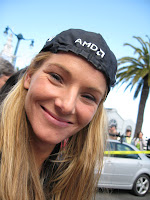 wore it proudly all through the rest of the day. We got some amazing photos of Ivan Basso and George Hincapie, Jen's favorites. I must admit that I do love taking pictures so the four hours went by rather quickly and we were certainly in the prime place for gawking and photographing the members of Team Discovery. It was interesting to find out that the bicycles they ride cost between $10K and $15K each and that the time trial was only 1.9 miles, but the last half was up Telegraph Hill to the Coit Tower! The three of us walked the course and it was a steep climb on foot. I can not imagine trying to do that hill on a bike, let alone racing up the thing! It would have killed me. It was very interesting to spend the day with the two race fanatics. 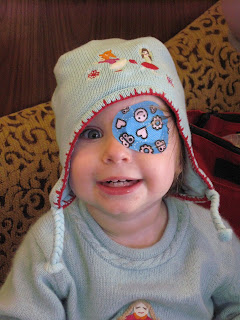 Monday morning I got up very, very early and flew down to San Diego. I took the shuttle to Annie's and was there before noon. Alex is huge, compared to how big she was in October, the last time I saw here. She walks and talks and laughs and giggles and is an all around goofy kid. She's funny and smart and adorable and no, I am NOT biased! We had some quality time together, especially in the early mornings when Gramma would go rescue her from her crib before Mommy and/or Daddy woke up and on the Thursday of my week's stay when Annie let me care for Alex while she went to work. It was heavenly to spend so much time with her. I miss her so much now that I'm back in Edmonds. I know she's forgetting me all over again.
Annie and Alex and I went to the Quail Botanical Gardens on the 20th and had a wonderful time. The gardens feature amazing desert plants and trees, a walled garden, an orchard 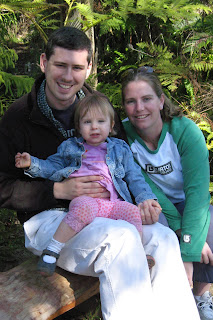 , a bamboo garden with a pond, a waterfall and a children's area that even boasts a miniature train and an area to dig for "dinosaur" bones. We had a ball. Annie got a year's membership and on Saturday we returned, this time with Chris in tow. I really liked the bamboo garden. It had an amazing collection of different bamboos, from fine little specimen plants to large, timber-type bamboo. I was also very surprised to see the huge variety of aloes and agaves that the garden has on display. Not knowing anything about desert plants, it was great fun to see the variety. I will lobby for a return there when I go back down to visit. I could move in---and it's only about 10 minutes from the kids' house.

I have finally finished the "Hooked on ArtFest" ATCs to take to trade at ArtFest. I carved the fish stamp and then used embossing powder to print the stamp onto the base paper. The back of the ATC was done with the scanner on the new combo printer I got for Christmas (Canon MP830...I love it for everything but printing photos). Lots of separate steps but they turned out well. I hated the bending brass wire into fish hooks part, however, as it took forever and was truly boring to do. I

think the hooks added a lot to the cards so it was worth the tedium. I'm happy with the finished product and won't hesitate to trade them at ArtFest so I would call it a successful project. I felt like I had to have a hand carved stamped ATC for ArtFest. I did this to myself with starting off with "Wingin' It" last year. I wouldn't want to disappoint my fan (and I do mean fan in the singular!).
I am now frantically working on making some charms for ArtFest. A large contingent of the attendees are making charms and I'd like to be able to participate in charm trading, so I am making my first charms for this event. Not getting the supplies from the place I'd ordered them set me back, but I reordered from another supplier and everything came on Monday. It's not the easiest thing I've ever done but I can see that as you learn and take your time, 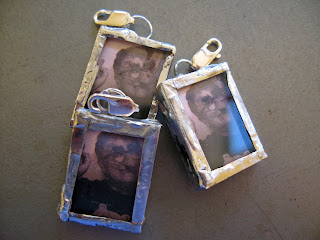 the charms will get better and better. I am having some difficulty in getting the bails to be well connected to the charms proper, but I think I've worked out what I was doing wrong. I did get little lobster claw clasps so that you can just clip the charm to a bracelet or necklace and off you go. The image is the photo of me I took for inclusion into the ArtFest "yearbook" that Teesha is working on. I am wearing my mother's Groucho Marx glasses and nose. Yes, my mother owned these first---and wore them on occasion, too! (Hard to imagine if you knew my mother, but true.) I rather like the silly photo of me and I must say, it was sort of fun to run over to Third Place Books and use their photo booth. It was an expensive day, though. I bought about $100 worth of books on my way out of the store! I still have a lot of charms to solder, but I hope to have around 50 to take to ArtFest.

Lise is coming to stay for two weeks from Norway. We just found out, Rune and I. She'll be here next week and will stay through the 1st of April. I'm not sure where she'll be from the 26th on as I'll be away at ArtFest, but I know that it will be nice to see her. Too bad she didn't make arrangements to come next month when I'll be home and when Cathy and Mac will be back from Mexico, but she's coming when she's coming and that's all there is to that.
The daffodils are blooming and spring is here, at least as far as the plants are concerned. We had two days of snow on the ground last week. Dom McK. reported there was close to 10 inches at Grant Creek on evening but it melted off quickly. I know there was quite a pile of snow up there last weekend where it slides off the garage roof, blocking my path from the back door to the ceramics room door. It was about two feet high and I had to clamber over it to get to the garage. I kept getting snow in my slippers. I HATE that! We had snow here a week ago. Enough snow that the EAF board meeting was cancelled as Sue J. couldn't get out of Everett. Yesterday it was a balmy 70 degrees. Go figure. 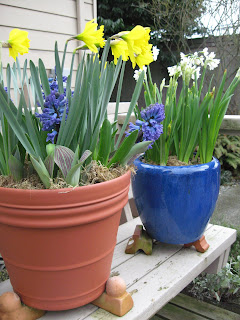