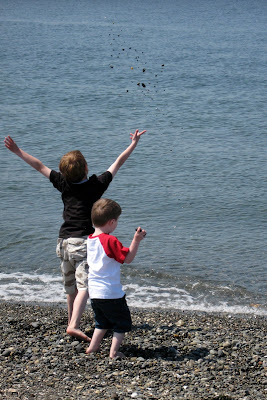 We have had almost a week of nice weather. In fact, it was over 80 yesterday! I've been spending a lot of time on the beach, picking up beach glass and the odd chiton or China hat, but really, just soaking up the sunshine and loving living five blocks away from such a lovely stretch of water and sand. I am sooooooooo lucky.

I am getting inspired to do a painting (or two) of the beach. I have been struck by the sheer joy and unabashed delight I see in the body language of children---playing in the sand, building sand castles, digging to China, throwing rocks or just hunkering down to look at some thing that caught their eye. The more I watch, the clearer the mental picture is becoming. I hope that pretty soon I'll feel compelled to take paintbrush in hand and try and get what I see in my head onto canvas. With that in mind I have been taking a lot of photos of children. I have had to be careful t

hat I don't give any wary parent the idea that I am stalking their precious off spring and I have spoken to several parents about the fact that I'm getting images for a painting or two I have planned and have gotten permission to take the pictures. I try not to get any photos of children with their faces clearly shown or anything that would be recognizable, as it's the body language that I want, not their particular face. So far, no one has said no, but no would be a very acceptable answer. (I did show one mother the photos of her little one I'd taken to make sure that they met with her approval, and they did.) I have to be careful, though---I'm not trying to be a creepy stalker!
I finished the thank 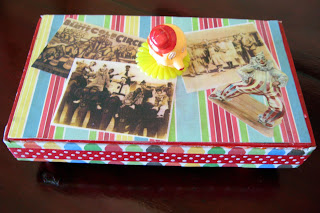 you note/box I made for Teesha Moore and got it packaged up and sent off to her today. I am very happy with how it turned out, especially the elephant thank you note itself. I used a cigar box as my base and then went with a circus theme. Bee told me how much Teesha loves anything circus, so I thought that I'd start there and see what developed. I found some old circus

photos, including a great one of circus clowns on elephants. I reduced the photos and put them onto the cigar box lid, that I had previously covered with bright papers that made me think 'circus.' I used ribbon to decorate the box and also as a hinge and stoppers (to keep the lid from opening too far). Inside I placed two popcorn bags from Barnum and Bailey Circus that I bought on eBay. In the smaller one I put one of those silly Fortune Telling Fish, the ones we used to get a hundred million years ago when I was little and in the larger, an elephant decorated with "Circus A

rtFest" on a blanket on one side and the actual thank you note to Teesha (and Tracy, too) on the other. Inside the lid I used some clown items I got in a bag of ephemera ages ago and a little pin I found that said, "One clown short of a circus, now, aren't we?" That seemed appropriate! I packed the box carefully in a larger cardboard box and then used real peanuts, in the shell, as

my packing material. I thought that was inspired....but maybe it was just silly? Then I decorated the package with a circus tent for the addressee and a blue balloon for my return address. I found some more clown images that I used here and there on the box and all in all, it was quite festive. I hope Teesha likes it. I surely had fun making it for her.
I bought a little craft sewing machine that arrived today. The first project I have in mind for it is the 100 recipe cards I need to do for the recipe swap for the opening event at Art & Soul in Portland in October. I have decided to use the watercolor crayon drawing I did last summer of a fig cut in half as the front of the recipe card and then on the back I'll have my recipe for fig and pine nut salad with lemon vinaigrette. I plan to reproduce the fig drawing on watercolor paper and then print out the recipe on card stock. Then, I'll just sew the two pieces together to add some interest and I think it will be cheaper than using my Xyron machine for adhesive and faster, too. At least, that's the theory! I like the idea and think I can slam them together pretty quickly. Well, as quickly as these monster projects ever "slam" together, anyway.
Susan P is home from her cruise and things are moving along for the festival. Last night a bunch of the foundation and festival people attended the City Council meeting as a Proclamation of our 50th anniversary was read. Darlene McLellan accepted the "honors" on behalf of the foundation/festival and Ann McD, our eldest volunteer who is still actively volunteering during the festival, was honored. It was sweet and I was happy I took the time to go. (Rune and I cut out immediately after and went off to the movies, as it was date night. We saw Georgia Rule, and while it was a much darker film than I expected from the trailer and from the ususal sort of movie Gerry Marshall directs, it was good---not great, but good. I was especially impressed with Lindsey Lohan. I didn't realize what a good little actress she really is.) Tomorrow night is the opening reception for the 50 Year exhibit at the museum, besides being Third Thursday. I need to attend the mu 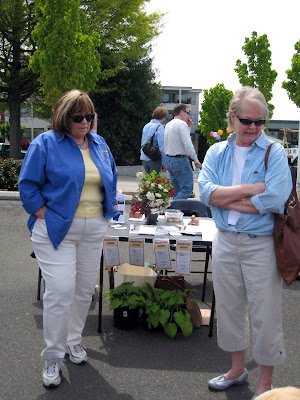 seum reception, at least for a while, and then I'll go walk around town and check out the new exhibits at the galleries. I love doing that. We did very well drumming up new volunteers at the two Saturday markets we "worked" this year. Over 40 separate shifts came out of our push for new volunteers and I have some names of people who want to be contacted next year but were unable to attend this year for various reasons, travel being the biggest one. Next week is our second, and last, volunteer meeting at ArtWorks. I hope we can fill in a lot of our empty slots then. I think we are on track but this is nail biting time as I have no real idea how many more people we'll get to sign on and we need a lot more to fill most of our empty spaces.
Susan P is working on making the airline reservations and the ferry and hotel arrangements for the trip to Alaska. We're all on board. I spoke with both the Sand(y)(i)s last week and we decided to make the trip August 18 through the 29th. It should be great fun and I'm really looking forward to going to Sitka. I've always wanted to go there. It'll be great fun to see some of Alaska with the Three Ss'! More on the Alaska trip later.
Posted by Michele R. Unger at 5:53 PM

Wow. Creepy stalking and clowns all together in one post!! Remind me to steer clear of your neighborhood if I want to sleep well at night. You haven't seen Tim Curry wandering about, have you?