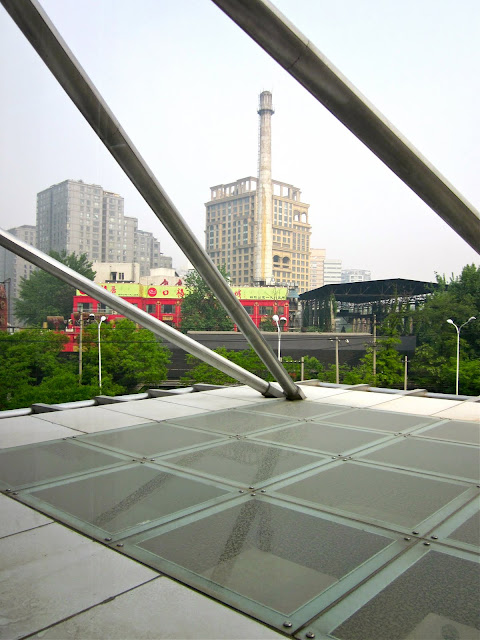 We returned home from China on Friday after a loooooooooong flight from Hong Kong to San Francisco and a "short" flight from San Francisco to Seattle.  Yesterday I was scheduled with Edmonds Arts Festival volunteer work, so I had no chance to work on my photos.  This morning I found I had slept almost 10 hours straight, an occurrence of rarity in my life.  I usually manage six to seven hours.  I will admit to being gobsmacked when I saw what time I awoke, and then only because the phone rang!  I'm not functioning on all cylinders today, so will only post a few preliminary photos as a sort of teaser to try and lure you back to my blog in a day or two, when there will be a proper posting with better photos.

The above shot was taken from the hotel in Beijing, the name of of which escapes me at the moment.  For that matter, my name escapes me at the moment....oh, this jet lag, it's a KILLER!).  The part I found interesting is the old factory smoke stack in the background.  There used to be a very big factory of some sort right in the midst of this rather residential area.  The factory is closed and most of it has been demolished, but the smoke stack remains still.  I gather it, too, will soon be gone but it is a rather interesting juxtaposition of the "old" China and the "new."  More high rises will be built on this site, probably residential apartment buildings. 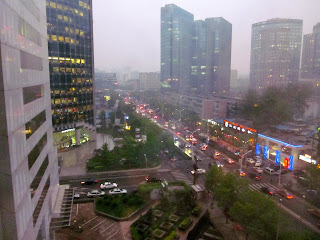 This shot was taken from my hotel window in Beijing in the early evening.  You can see how the area is becoming more developed and how the high rises are creeping in.  Soon it will be a forest of high rises.  The symbol of the new China is a building crane! 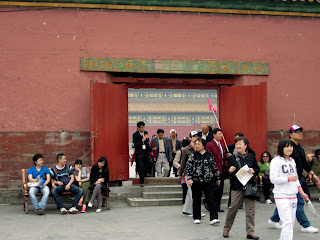 Here we have an exit gate from the Forbidden City.  I'll have more photos of the amazing Forbidden City in a day or two.  It looks, truly, as it was portrayed in the movie The Last Emperor.  I felt like I was on a movie set the whole time I was there, having just re-watched the film. 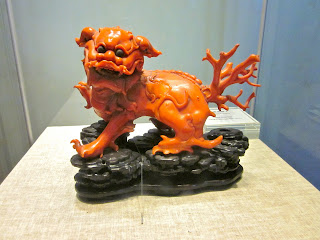 And here is one of the treasures inside the Forbidden Palace museum, a Foo Dog or more properly, a Lion, made of carved coral.  There was a burglary there while I was still in China.  I gather the thief found it easy to walk off with several ladies compacts that were a part of a collection on loan from a collector in Hong Kong.  I don't remember the items, but I would think, having just been there, that it would have been very difficult to swipe something from the museum.  But, then, I am not a burglar!  I'm happy to report the man was caught.

Tomorrow (or the day after) I'll have a proper post.  I am wading through well over a thousand photos and it takes time.
Posted by Michele R. Unger at 2:49 PM

I hope I don't get jet lag when we fly to LA. The dog/lion carving is amazing. It sounds like you had a great trip. I can't wait to see more pics.