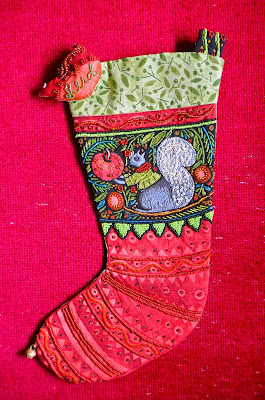 I have made Christmas stockings for each of my children and have carried that tradition on to include the grandchildren.  As Reid was born at the end of July and his first Christmas is fast approaching, I have been working on his stocking.  Late (LATE) last night I finally finished it. 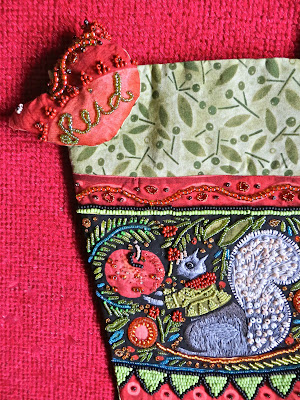 I made a very similar stocking last year for Reid's sister, Rawlings.  Hers sports a mouse in place of the squirrel on this new one, but both have the same lining and backing and over-all design.  I found Christmas stockings printed on fabric panels last year and thought what a great jumping off point they would be for something a little different than my usual stocking of felt and sequins.  The hand beading was lots of fun and something I hadn't done before until last year. 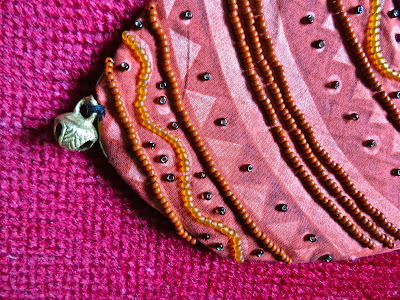 It is my opinion that a Christmas stocking requires a bell on the toe. 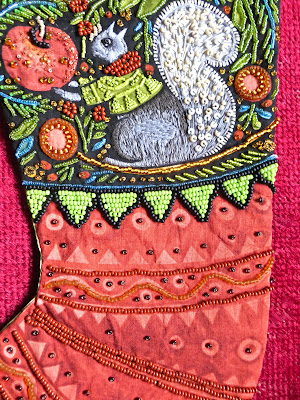 Reid's stocking has been boxed up and sent on its way to his mother.  I hope it is well received.  It was lots of work, but very much fun---except the part where I had to use the sewing machine to put it all together.  I have no great skill with a sewing machine and they all, apparently, hate me.  They fling bobbins at my eyes, trying to blind me.  The machine last night spewed miles of thread at me, rather like a python trying to strangle me where I sat.  The lights on the infernal contraption flickered, the tension was all overt the chart, the pressure foot seemed to have a mind of it's own and all in all, the machine sewing part was lengthy and fraught with difficulties.  I did, in the end, get it assembled. 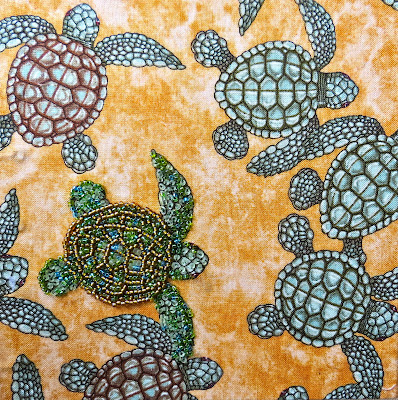 Once I finished the beading on Reid's stockings I couldn't bear to stop.  I have had this turtle fabric hanging around for a while now as I wanted to use it to cover a travel journal for my next trip to Hawaii.  I decided to bead just one turtle for the front cover.  I got that little turtle beaded rather quickly and have now attached the fabric it to the journal, front and back.

Then I put all the beads away.  Neatly.  (An unusual step for me, that neatly part....) 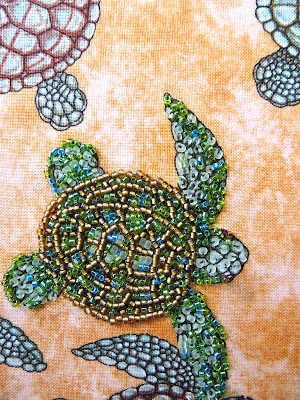 they are BEAUTIFUL~~~~
what a treasure for your children and grandchildren.
hope all is well on your coast :)
have a blessed thanksgiving.
miss you. xo
kim

The stocking arrived safely today and it is just beautiful. Thank you so very much. The little ones will love them forever.

Gorgeous beadwork! I can't imagine all that work, but what a treasure for someone.