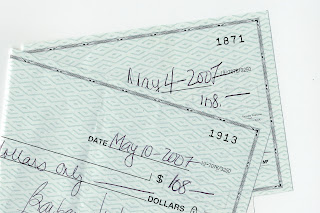 I have sold a grand total of 12 charms to Barb at Bluefish Design! I think she really likes them. She likes them enough to pay me real money for them. It's been fun looking through my art and my photography and trying different things to see what makes a good charm and what doesn't. I have also been experimenting with different photography paper and have discovered that I like the HP heavy matte paper the best. I seem to get the best color saturation and the detail is good. The lacquer works well on the paper, too. I have been making more charms for my art bracelet, too, as it's nice to have most of the things I like the best on the bracelet. After all, had I not been wearing my bracelet when I wandered into Bluefish that day, I never would have known that there is a market for these charms. One of the sales clerks at my favorite local dress shop really likes them too, as does a clerk at C'est La Vie. Perhaps I should start brainstorming other places where I could sell the charms, perhaps on a simple silk cord. It might be fun to see. Maybe in the fall when things quiet down!
Barb told me that she had made a first piece, a necklace, with the banana leaf charm she bought. She was planning on wearing it herself on her trip to Hawaii next week, but a customer saw it on the counter and said, "I want that. How much?" So Barb sold her necklace. (I gave her a banana leaf charm as a thank you gift, so she can make another necklace for herself.) I loved that it sold so quickly. Perhaps they'll sell well and Barb will want more? Wishful thinking, I fear, but time will tell.
Barb plans to put several pieces featuring the charms in a front window display and had come up with "We've been charmed by local artist Michele....". She insisted I give her a very short artist's statement and I had more trouble writing that one sentence than I've had writing anything for years! My first attempt was about a hundred thousand words, all stilted and icky and the more I pared it down, the drier and duller it got. I asked Connie to help me and he came up with something that you would expect to find included in some sort of electric appliance package, to ward off possible legal problems. He'd have made a good lawyer! Then I got Nonie involved and while she was helping me I came up with, "Local artist, MU, uses her original art and photography as the basis for creating these charms and pendants." Finally came up with ONE SENTENCE that said what I wanted it to say. Sheesh! I could have written the Great American Novel with the energy it took to write that silly sentence. Why do I always seem to make things harder than they have to be?

I was in ArtWorks the other night, picking up my mail, and found this oddly bubble-wrapped package in my box. It had a note attached that said "It's IN!" and I was thinking, "In what? Huh? What IS this?" when it finally dawned on me that my miniature painting has been juried into the show at the festival next month! Talk about slow on the uptake! I somehow resisted the almost over-powering impulse to shriek and shout and dance about in an insane manner as there was an art class going on and I didn't want any witnesses. I had to calmly walk out of ArtWorks, not shouting nor shrieking and act like an adult. It was difficult. It amazes me that I've applied to the show twice and gotten in both times. What a joy that is---recognition by other artists that your work is good, at least to the jury members. They aren't family, they don't have a clue who you are, they are just picking things that they like by whatever criteria they use to select pieces for the show. Some stranger is saying you did well. That is a great feeling!
Tomorrow is the second of two volunteer drives at the Saturday Market. It was fun last week being at the first market of the season, even though we were woefully short of people to help out. There were just too many things going on last week. Tomorrow looks fully manned, if everyone shows up who signed up. I won't have to press Nonie into service this week. This is meant to be something that the board does to gather new people. Nonie shouldn't have to fill in---and tomorrow she won't have to!

I talked with Sandi from Wenatchee and Sandy from Alaska and we have decided that the our trip to Alaska for Susie's 65th birthday will be August 18 through the 29th. Susan ordered us to figure out the dates while she was away on her cruise and I fear she would have been most put out with us had we not done as she asked. It was fun to talk to them both. I'm not even sure where all we are going to go while in Alaska, but at least I know when I'll be there! It's going to be quite a busy summer with the art festival, leaving for South America and the Galapagos Island ten days after the festival, then coming home and, boom!, Annie, Chris and Alex will be coming for two weeks. I will head out to Alaska three days after they leave. I am going to be sleeping most of September, I think! And then Art & Soul in Portland starts on October 2nd. No wonder I never seem to get the ironing done!
I have begun the process to try and get into the clay group that meets at the Francis Anderson Center. I went to their sale and show today and spoke with Fran. It seems that there are only two openings in the day group (and none in the evening group) and there may well be three applicants. It might take a while before there is an opening for me and then it's a six month trial period, so the group can be sure that you are a good fit and that you slot well into their existing "family." I also met the other two board members, Tina and Jan, both lovely ladies. I think it would be a great group to belong to, and I would love to have access to a studio with a slab roller. They buy their clay by the ton, too, so there is a considerable savings there. If I get in, I'd have a key so I could work in the studio whenever I wanted, except when the night group is meeting. I will go a week from Thursday and meet the day group and let them get a look at me. I hope this works out. Having a full fledged clay studio with most of the "toys" two blocks from the house seems like a dream come true....
Must go photocopy the schedules so I'm ready for the morning. I'm meeting Rune for breakfast at 7:45---I need to go to bed!
Posted by Michele R. Unger at 9:41 PM

Way to go, Mom! You're just the coolest.