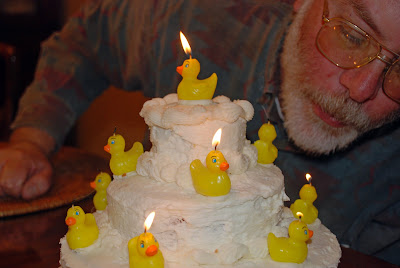 Today was my DH's birthday. We are now entering into those lovely three months when I can claim that he is "so much older than I" and that he was born "in an entirely earlier decade!" Yes. I can. And I will. 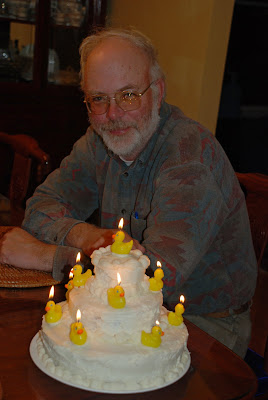 I baked DH a big, big, BIG three layer sour cream birthday cake. With rubber ducky candles, no less. I made such a big cake so he could take it out to the gun club tonight to share with the other Thursday night trap shooters. I'm sure there will be no cake left when he returns home. I rather like the ducky candles.
DH's Dear Mother gave him the jackalope for his birthday. This one even sports wings, tail feathers and bird feet! I had never seen one like that before..... 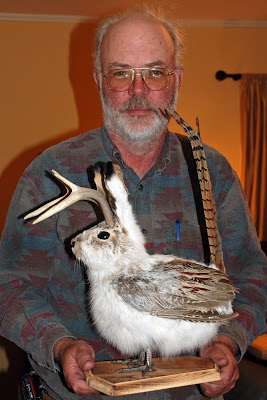 He is very fond of his jackalope. DH is smitten with his jackalope, almost smug to actually own one. DH is taking it to his cabin. Tomorrow. He likes it.

DH is taking it to live in his cabin, the huntin'-fishin'-shootin'-manly activities cabin that fairly reeks of testosterone. He's taking it tomorrow. 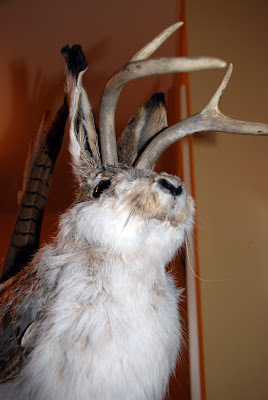 Happy Birthday DH. What a cake! Love the ducky candles. What on earth is a jackalope? Even with a picture I can't work it out. Obviously some thing to do with huntn,fishn and shootn.

Hilarious! And the cake is a work of art --- just ducky!