The Day Before Winter 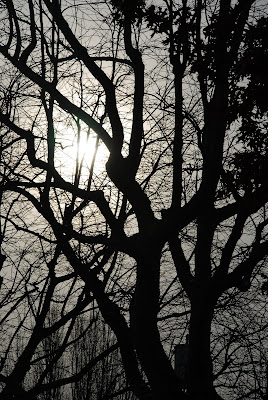 I do know, Dear Reader, that in many parts of the world the weather we are experiencing now in the Pacific Northwest is not unusual. It is common winter weather. Snow and ice are business as usual in many, many places. However, that said, I would like to point out that an inch of snow can bring this region to its knees. Can you imagine what six to twelve inches of this white stuff is doing to us? Added to the snow, tonight we are having major winds in many places. Think temperatures in the 10 to 20 degrees F range and then factor in the wind chill of 35 mph winds. Think no heat. Think no hot water. Think no lights, Christmas or otherwise. Think no hot cocoa. Try not to think about being homeless and thank God and the municipal authorities who have opened shelters all over the area. 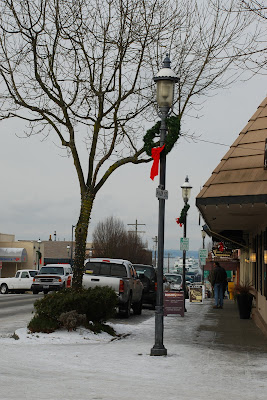 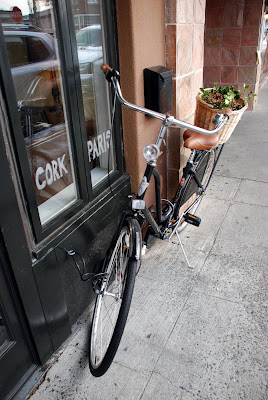 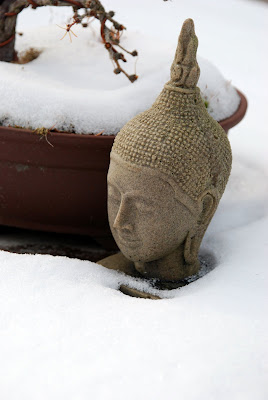 We have had snow and record breaking cold temperates for a week now. Most of the snow was melted away the other day, although ice was still a problem. I have been out and about in town, walking carefully, like a 900-year-old woman, for fear of landing on my backside (or worse, my head!) unexpectedly. I have ventured out and slipped and slid to coffee and the post office (your gift is finally in the mail, Tiff) and the bank. I have even rather enjoyed it. Well, sort of. I am not really a fan of snow in the lowlands. I strongly believe that snow belongs in the mountains, and only in the mountains. It does not belong in cities and towns in the lowlands, especially those that lie along large bodies of salt water, like Puget Sound, fer heaven's sake. Apparently Mother Nature does not agree with me and she has the weather chops while I only have the weather whines.
It started to really snow this afternoon. Very small and cold little flakes. It snowed all three hours I was at the movies (Australia, which I enjoyed much more than the critics, by the way---amazing photography!) and it kept snowing and kept snowing and kept snowing and it's still snowing and it is getting deeper and deeper and deeper. It's cold. It's very cold. It is pretty, but it is going to be awful tomorrow for anyone who has to go anywhere. I am supposed to take my friend Rune and my granddaughter Emma to see The Nutcracker. We'll see. Emma's daddy would have to bring her to me as there is NO WAY I could drive to their house in all this. NO WAY. 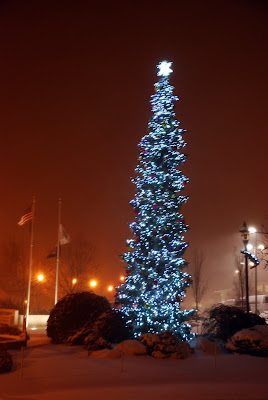 Have I mentioned that it is still snowing? Well, it is. 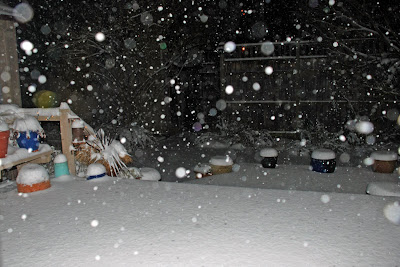 I am going to go to bed now and pull the covers up over my head and dream of palm trees and turquoise waters lapping against the hull of a tall ship, of gentle Caribbean breezes and hot sun and cool drinks. I may well stay in bed until March, when I will make my daydreams come true. 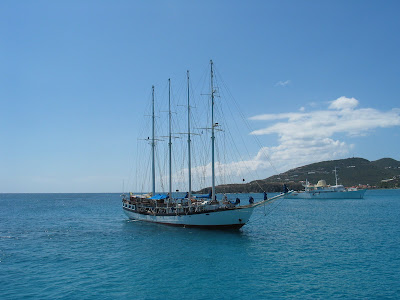 And it won't even be officially winter until tomorrow. 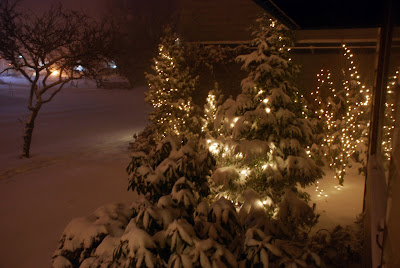 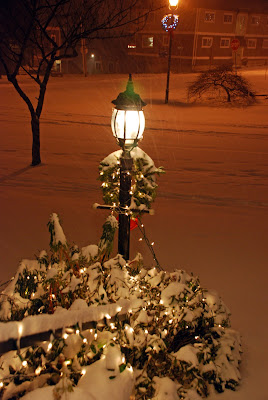 What beautiful pictures and beautiful words. It looks like a wonderland but I wouldn't like to have to go out in it or worse go to work in it.
We had beautiful weather today. Not too hot just right 28 degrees Celsius. The sky was blue but a few storm clouds hovering in the distance.
A pity I can't send you some sunshine via the internet.

Uh, could you please jack up the temperature 20 or 30 degrees before we fly up there? Please? My children live in Southern California, for cripe's sake. Ian doesn't even have shoes!

Alex is jumping up and down in the couch right now screeching, "Christmas! Christmas!"

Morning, Michele. I braved Highway 16 and I-5 on Friday night to see "The Color Purple" after paying to have my driveway shoveled and sanded. Now the driveway is covered with an additional four inches or so (there's about 10 inches on the lawn) and there's an icy crust of frozen rain on top of all that.

I agree with you -- I thought Australia was wonderful. The young aboriginal boy was amazing and fresh, Hugh Jackman delicious, Nicole perhaps not at her best but good enough.

Nice pics. Stay warm. Be glad you're not going to the Seahawks game today. :)

P.S. The photo on my blog, alas, isn't my current view. . . it's a view from the restaurant in Musee d'Orsay in Paris. There's this big clock with a window, so you look through the clock out the windows to Paris. It's hard to see, particularly when I desaturated my photo to black and white, but you can see Sacre Cour up on the hill in the background.

brrrrr...
just thought i'd let you know that i'm making your cranberry relish this afternoon, to go with - get this - our chicken curry tonight. yum!
roy was delayed overnight in mineapolis, coming back from british columbia. it seems to be cold everywhere. this morning it was 11 here....
merry christmas...xo nina