I took another cooking class at The Pantry at Delancey last week.  This spring soup class was as much fun and just as informative as the sour dough bread class I attended the week before.  Wendy Van Wagner was our instructor for this class.  Wendy is the owner of In the Kitchen in Nevada City, California, a community kitchen and cooking school.  She is a great teacher and encouraged lots of hands on work for the class, the learn-by-doing method that works so well for me.

We made four soups over the coarse of the evening----creamy mushroom, potato and fennel, an Indian vegetable and lentil and a Spanish style fish soup, very similar to a French bouillabaisse. 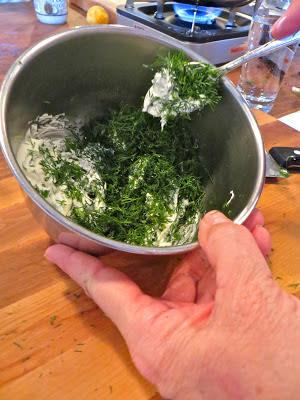 We used this mixture of crème fraîche and dill to top the fennel and potato soup.  It was goooooood.  I know that I will use this mixture to top other soups, such as borscht or a hearty vegetable.

The mushroom soup was made with half shiitake and half common button mushrooms.  What I loved about it was how creamy and rich it was without any cream.  None of the soups we made that night used a meat stock/broth for the base, except for the fish stock for the Spanish fish stew.  It's nice to get away from meat stock once in a while. 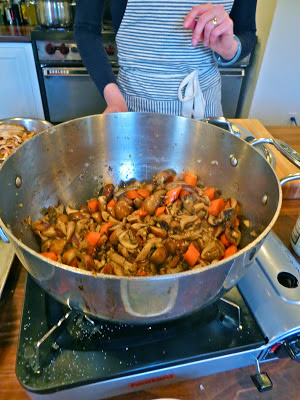 Wendy stressed the importance of getting the vegetables well caramelized to develop sweetness. Be sure to scrape up all the browned bits that cling to the bottom of the pan by deglazing with some liquid----stock, wine or water.  That's where the flavor hides! 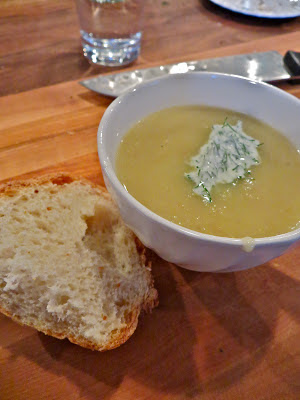 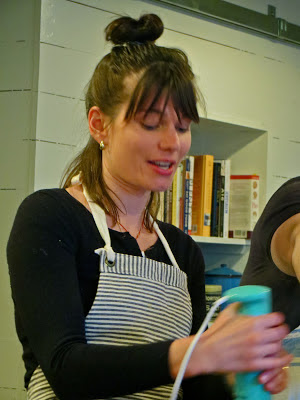 By the end of the class we were all singing the praises of an immersion blender!

Frankly, there wasn't one soup in the group that wasn't stellar, but I do believe the mushroom was my personal favorite.  It's flavor was deep and mysterious, creamy and rich and was one of the best mushroom soups I have ever had.

I took this class with my friend Denise.  She's a great cook.  Like me, she is always interested in learning something new and perfecting her technique.  I should probably have been taking notes myself, but it was fun to sit and watch Denise do all the work! 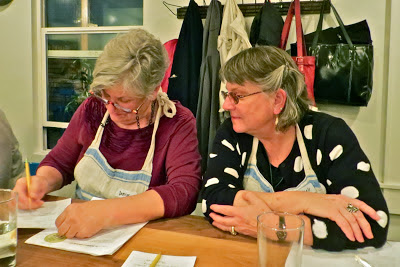