EFA09_SwimStart_Upperdeck from Rick Gaston on Vimeo.

My eldest daughter has been doing triathlons for a few years now, and yesterday she did her third Escape from Alcatraz. I think. It might be her fourth. Her friend, Rick Gasto, took the video featured here from the top deck of the barge all the swimmers use as the starting point of the race. They all leap into San Francisco Bay and battle the strong currents to a specific landing point on shore. The race date moves around each year as the organizers try to pick a day when the currents will be as gentle as they ever get. The entire race consists of a l.5 mile swim, an 18 mile bike ride and then, an 8 mile run.
Just a little training day for an Ironman Triathlon, my daughter said. You see, later this month she is off to Nice. Yes, that's Nice, in France. She will be competing in another Ironman there. (She completed Ironman Coeur d'Alene last summer.) The Ironman course consists of a 2.4 mile swim, a 112 mile bike ride and a 26.2 mile marathon---all in one day. 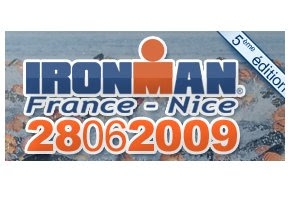 And she really is my daughter. Who would have thought it?

You have one tough daughter. I would have liked to try that when I was young but I don't remember that it even existed. That swim looked very difficult. I wonder how they determine a winner when they all start at different times. Are they timed?

We all wear timing chips around our ankles. There was a timing mat on the deck that we crossed as we went to jump off the boat. Once we crossed that mat, our time started ticking.

There are also timing mats on other points of the course to ensure that you complete all portions of the race.