Of Robins' Nests and Poetry 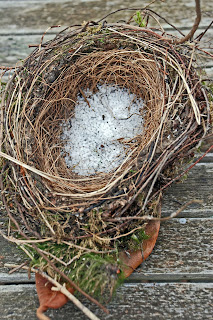 My friend Denise brought me the most perfectly made robins' nest this morning. It still had snow in it from the flurry that went through town early in the day. I can't believe how beautifully made this nest is and how perfectly exquisite. 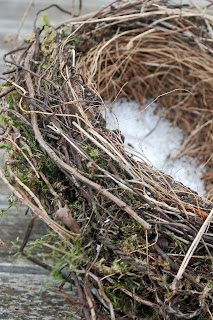 I also can't believe that Denise would give up such a gorgeous prize to me! She knows I love birds' nests and thought I would like to have this one (oh, I do!) and so she just gave it to me. 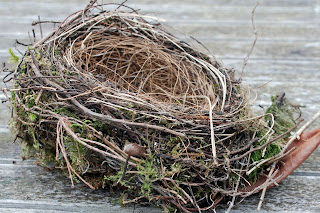 The nest reminds me of this poem, of course, as I have been reading Mary Oliver since the weather is so foul here and I just want to curl up inside doing projects, read poetry and drink Snow Geisha tea.

all the singing is in

the tops of the trees


with its white eyes


he wants to go to sleep,

he has an idea,

and slowly it unfolds


from under his beating wings

as long as he stays awake

But his big, round music, after all,

is too breathy to last.

he makes his nest,

he’s done all he can.


I don’t know the name of this bird,

I only imagine his glittering beak


which he has summoned

which he has taught

to be mild, and silent—


thicken, and begin to fall

into the world below

of some unimaginable bird

that is asleep now, and silent—

that has turned itself 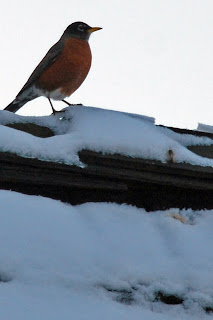 That is an odd thing to collect but the engineering is quite amazing. I watched a peahen make a nest on a lake today. It was fascinating.

That is an odd thing to collect but the engineering is quite amazing. I watched a peahen make a nest on a lake today. It was fascinating.