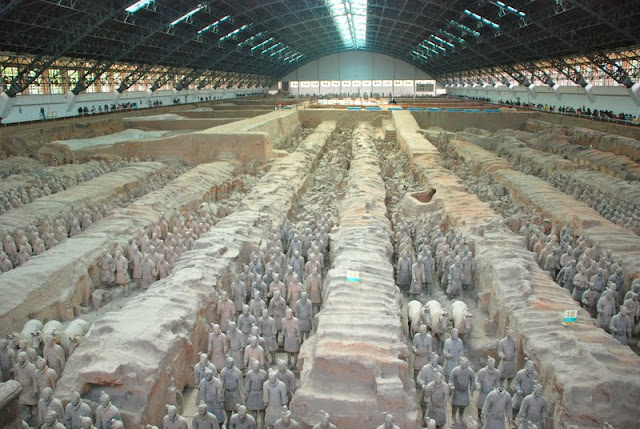 The Terracotta Army was discovered in 1974 by farmers digging a well near Xian.  The army consists of soldiers, officials, musicians, horses, chariots....all the things an emperor would need for a proper army.  This army is part of the mausoleum of the first emperor of China, Qin Shi Huang.  This site dates to the 3rd century B.C. 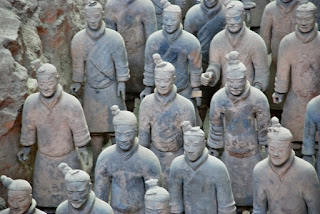 The figures are amazing.  They have different faces, postures, hands, stances....all in all, just like a massive group of soldiers all in formation. 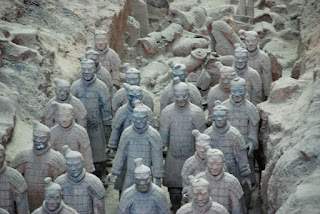 There are three pits where the figures are aligned in orderly rows.  Most have yet to be uncovered!  The total number of figures is expected to be over 8,000 when all is excavated. 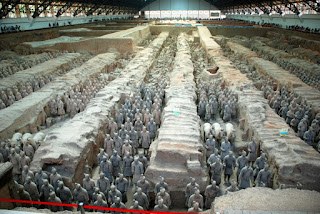 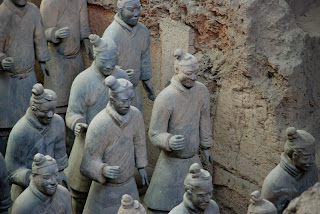 At some point in history, all the warriors were "destroyed."  Grave robbers, or people with some sort of agenda against the Emperor Qin Shi Huang, knocked over and smashed into pieces every figure, every horse, every wagon.  Just to break up so many figures must have taken a long time with a lot of men.  Why?  No one knows.  I found it amazing that the figures are being reconstructed so beautifully and carefully.  The estimate for completing the restoration and uncovering all the pits, and graves in the complex, will take something like 100 years. 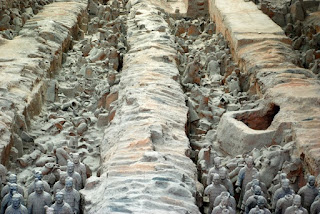 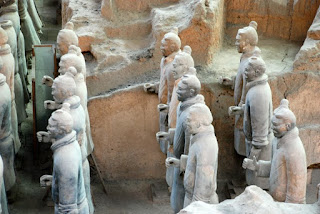 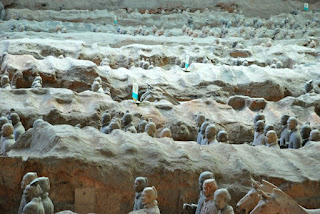 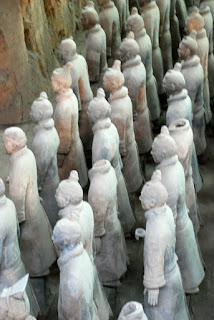 It was sort of spooky looking at them, all lined up, waiting to do the bidding of an emperor long returned to the clay from which the figures were made.  I can't imagine how truly creepy it would be to be in that building, alone, at night.....makes me shudder just thinking about it! 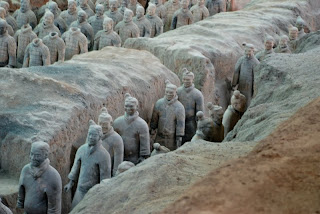 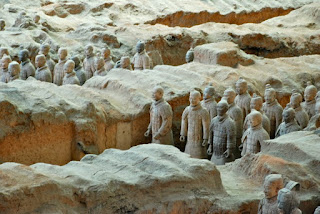 I start imagining what the warriors would sound like if they started marching up, out of the pits, on their clay feet....rank after rank....marching..... 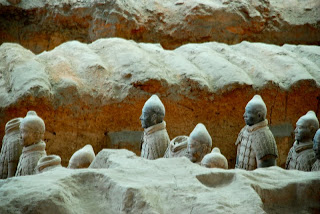 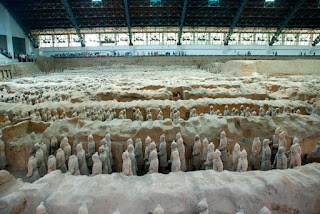 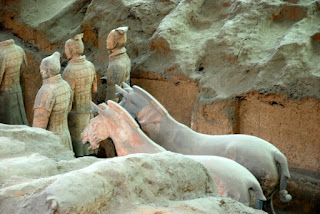 Would the horses whinny?  What sound does a clay horse's hoof make?  Have I seen too many horror movies?

Yes.  You are probably right.  I have certainly seen way too many horror movies! 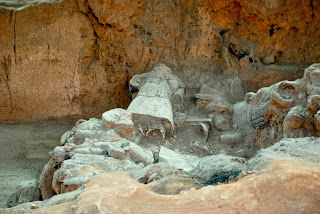 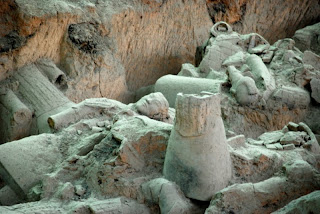 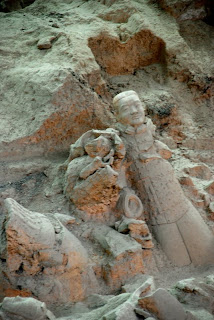 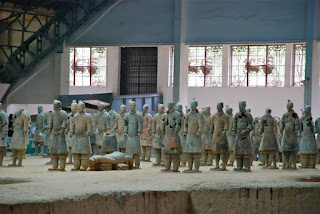 But, really, can't you sort of hear them rustling?  Like they are preparing for a forced march?  As if they are about to set off on important business of the Emperor? 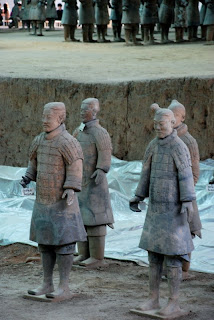 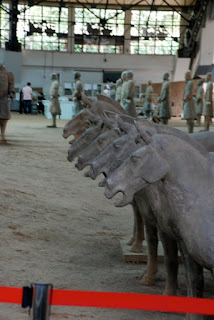 A horse tail flicking at a fly here.... 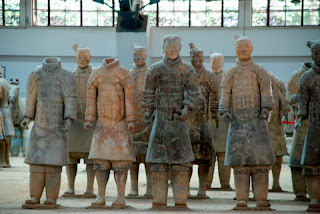 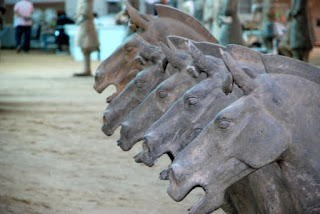 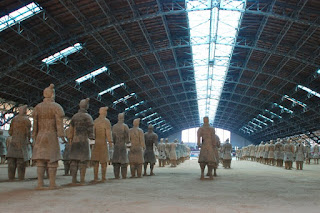 They are just awaiting the order to march, I'm sure.... 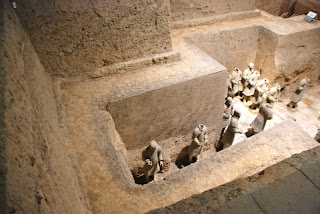 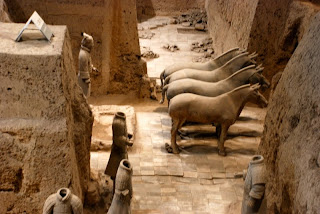 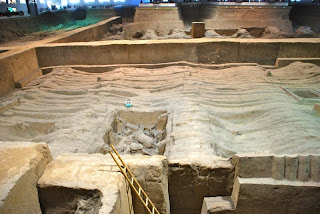 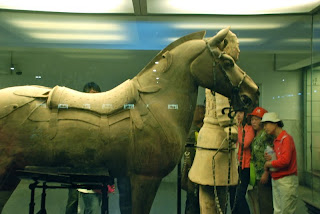 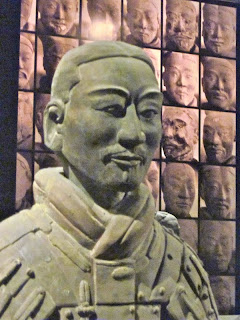 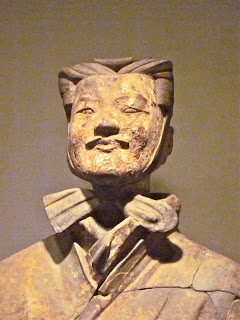 Both of these figures were on display in the Shaanxi History Museum (the province where Xian and the Terra-cotta Warriors are located).  The one to the left here reminds me, very strongly, of the actor Tom Skerritt!

What do you think?

Image of Tom Skerritt from http://www.greenday.net/skerritt.html

Oh Michele -- I've always wanted to see these figures. And now you've given me a ringside seat and tour.

Yes, Unknown, there are a lot of souvenir stands and some typical tourist trap things, but that is true of many places, all around the world. Is that reason enough NOT to visit these places? Does the fact that there are some shills and aggressive vendors detract from the amazing site of the terracotta warriors? I think not----your milage may vary.