An Edmonds Kind of Fourth 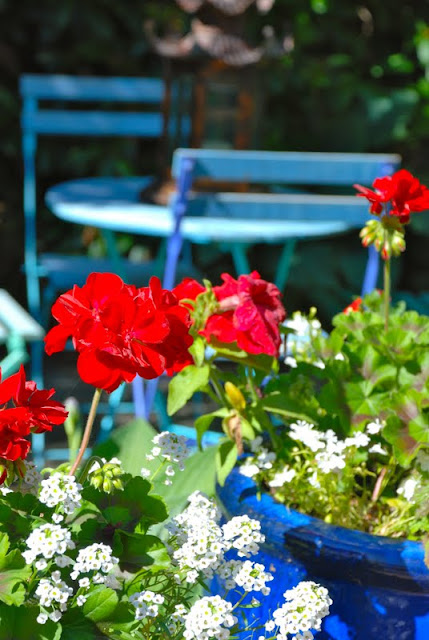 For the first time in I don't know how many years, I worke up on the 4th of July to a beautiful, sunny day.  It was a fine summer day---in the Northwest.  That is just so weird!  Usually it is overcast, often drizzly, on the 4th.  Blue skies, sun, balmy weather is as rare as can be----and oh-so-appreiated! 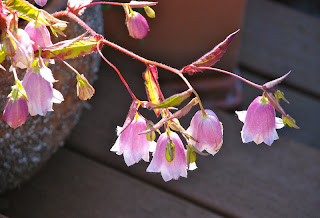 My pots out back were looking perky and beautiful in the morning light. 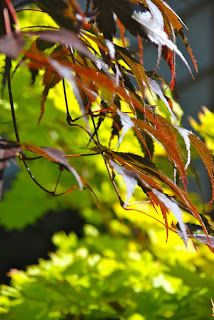 The sun hitting the leaves of the Japanese maples was gorgeous. 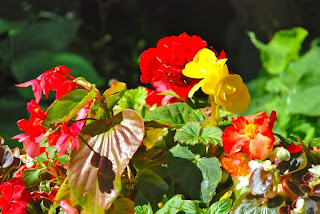 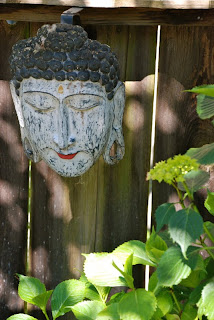 It was sunny even in the dappled shade.  And warm.  Did I mention it was actually warm and that I didn't have to wear a sweater? 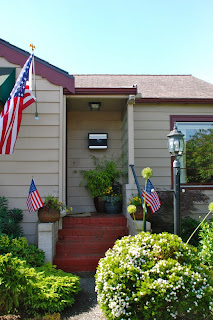 I have my flags flying out in the front, in preparation for the hundreds and hundreds of people who will be walking by my house on their way up to the playfield later on this evening for the fireworks display. 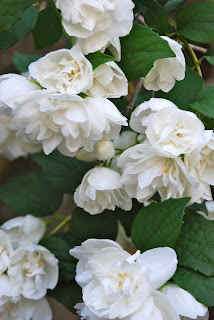 The mock orange (Philadelphus)  out back is just now in full bloom, a full three weeks late.  That's what sort of a spring/summer weather we've been having.....(We were calling is "Junuary.") 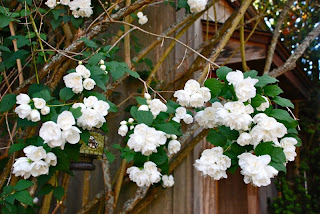 And then, in the late morning, the festivities began! 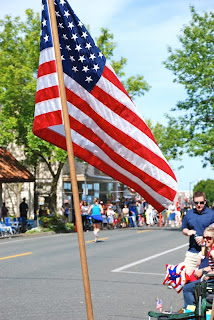 I actually got a little sunburn at the Edmonds 4th of July parade this morning.  Nonie and I put out chairs in front of the theater last night and so we enjoyed both the children's parade and the "grand" parade from our comfortable, front row seats. 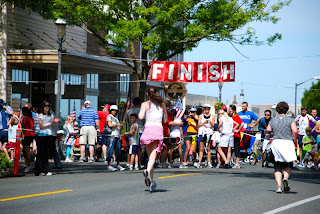 Before the parades started we watched the 5K fun runners cross the finish line...... 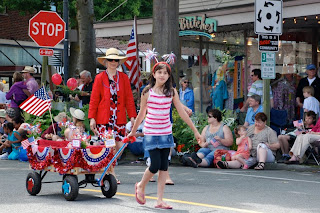 and then all the children began to arrive in their decorated wagons, strollers, bicycles, unicycles, Dad's shoulders......and the Childrens' Parade began. 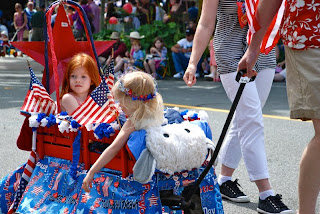 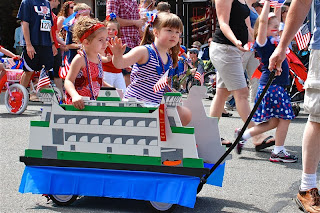 I loved the ferry "float" and the two little darlings riding on it. 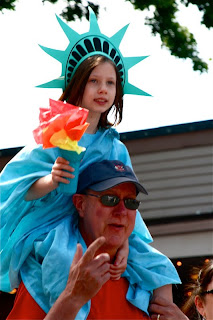 Lady Liberty was pretty cute, too. 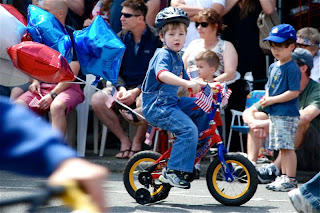 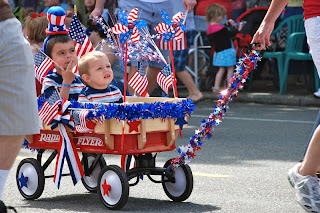 There were more American flags than you could shake a flagpole at..... 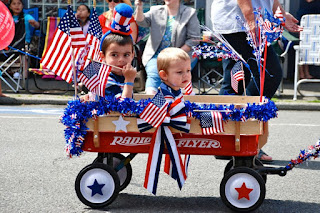 and lots of candy being tossed about.... 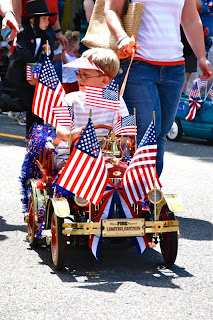 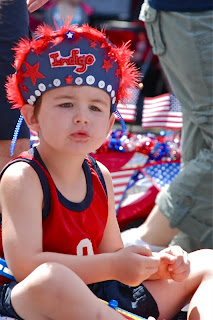 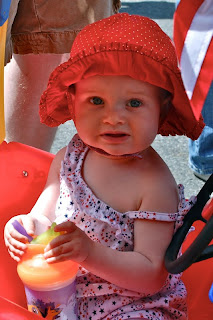 ...and even Harper, the daughter of friends of my son & daughter-in-law, was there in her decorated conveyance, looking oh-so-adorable! 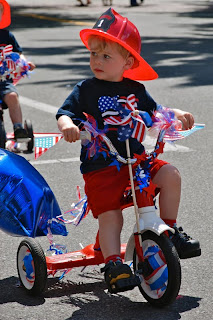 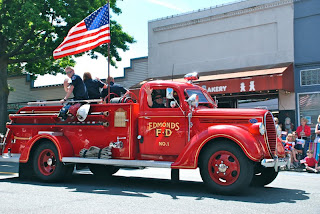 After all the darling little kids, the adult parade was sort of anticlimactic, but we watched all of it, too. 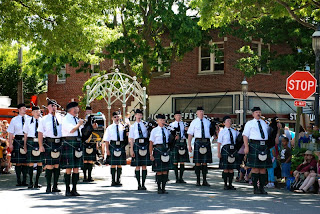 The pipers were good. 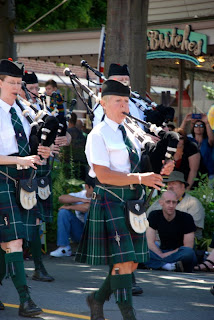 It did, I will admit, give me a thrill to see him. 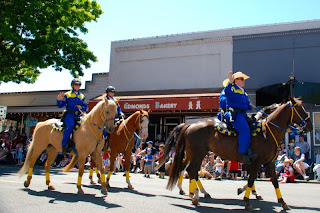 We had mounted posses.... 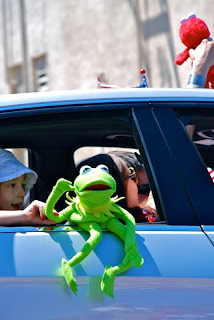 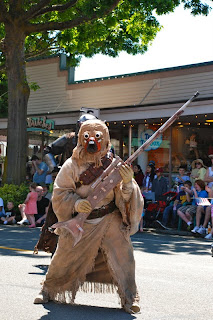 And this space alien who was more than happy to pose for me.  (I have no idea who or what he was supposed to be....) 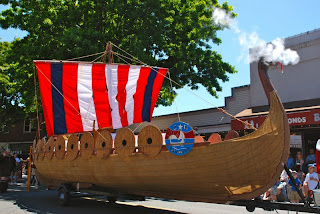 The fire-breathing dragon boat float, courtesy of the Sons of Norway, was pretty cool. 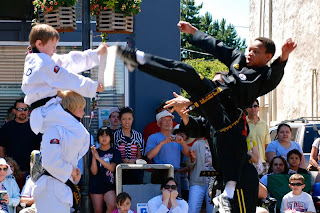 The local Tae Kwon Do college had some really good young board breakers. 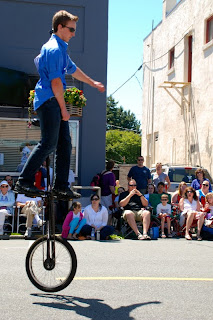 And this young unicycler could jump his unicycle up and down.  How do they do that?
All in all, it was a pretty darn good ol' Fourth of July parade and it was only a block from my house.
Tonight....FIREWORKS!
Posted by Michele R. Unger at 5:07 PM