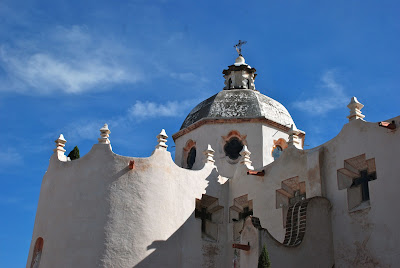 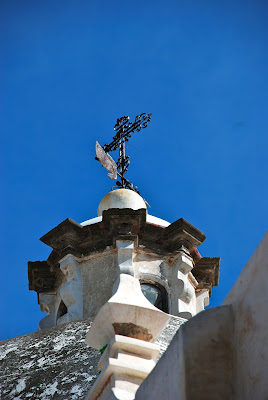 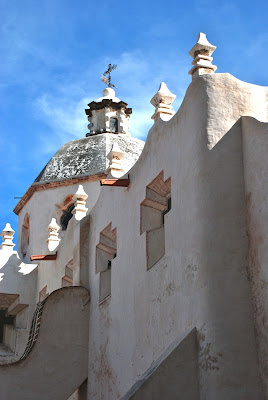 The church is now a UNESCO Heritage Site, which is wonderful, as it is a lovely church and a huge retreat center.  Apparently up to 2500 people a week come to the complex attached to the church for a week-long spiritual retreat.  We only visited the church. 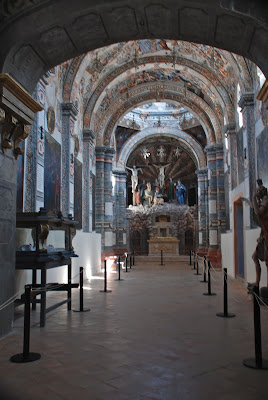 The church was built by a priest, Luis Filpa Neri de Alfara.  He not only built the church but cleaned out the area around the hot springs of banditos (!!!) and helped the indigenous people in various useful ways.  (The church, and San Miguel also, were on the Silver Road, the road from the mines in the north to Mexico City in the south, hence all the banditos in the area.) 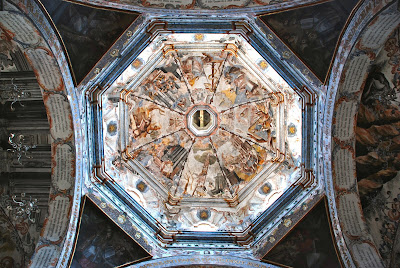 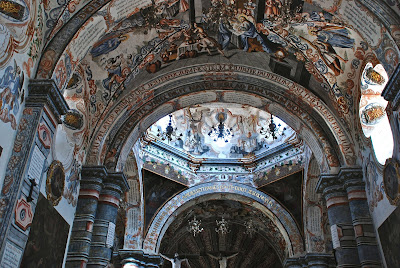 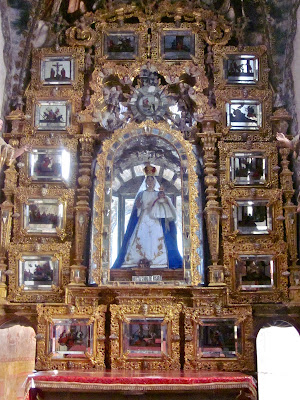 I believe this was the Chapel of Our Lady of the Rosary, but don't hold me to it.  Not being a Catholic it all gets jumbled up in my mind. 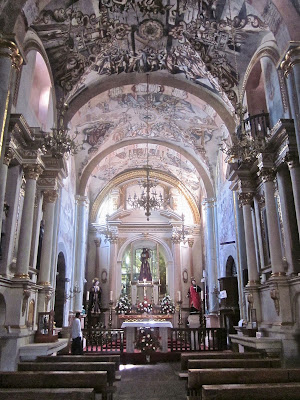 After our visit to Santuario Atotonilco we headed northwest to Dolores Hidalgo.  It is a smaller town than San Miguel de Allende.  Delores (as it's referred to locally) is a pottery town and I felt immediately at home there.  The pottery workshops and salesrooms begin to appear on the outskirts of town, just as they do in Shigaraki, where I studied pottery for six weeks back in 2004.  There is even a roundabout as you come into Delores that has three very large pottery Talavera jars in the center, just as there is an artistic rendition of three anagama kilns at the entry to Shigaraki. 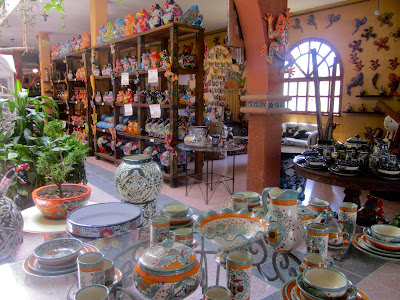 We visited several showrooms and Nonie found two sinks for her bathrooms back in Edmonds.  One is being done especially for her and the subject matter is mermaids---which is no surprise to anyone who knows her!  I found a wonderful birthday or Christmas gift for my DH and on the off chance that he might ever read my blog, I will not tell you about it and spoil the surprise.  We both bought some little serving dishes and a planter or two.  It was fun to see how the designs varied and the emphasis on what sort of ware each of the shops featured.  Talavera is such happy pottery. 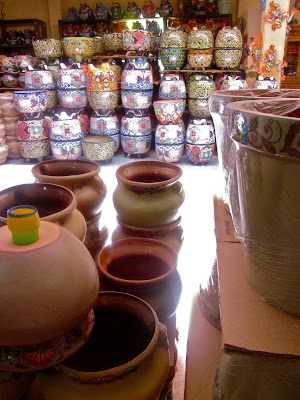 After we'd exhausted the shopping opportunities (and worn out poor Efrain who was such a help in toting it all to the car), we ventured to the Plaza Principal---the main plaza in Dolores.  Besides ice cream vendors at each corner, all vying to be able to supply the oddest flavor of ice cream (shrimp, anyone?) there is the church of Our Lady of Sorrows.  It was on the steps of this church, in 1810, that Don Miguel Hidalgo gave "El Grito" or the Shout for Independence.  Contrary to what many Americans believe, myself included until arriving in San Miguel and being set straight, Cinco de Mayo is not Mexican Independence Day, it's September 16th.  It was quite special to see this historic place for Mexico. 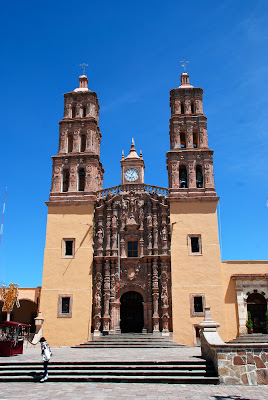 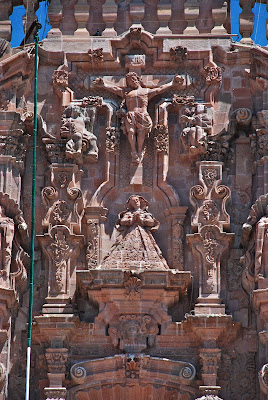 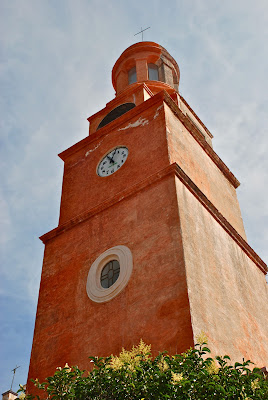 In the plaza, El Jardin I would hazard a guess is the name, is a statue to honor Don Hidalgo. 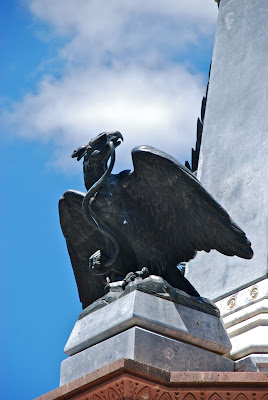 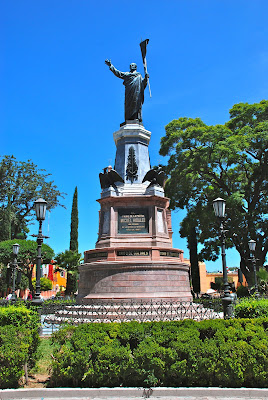 The photo below shows the City Hall of the town of Dolores Hidalgo, still decorated with banners for the festivities on the September 16th.  It looked very festive. 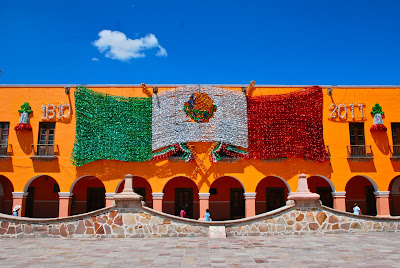 Efrain took us to have lunch at a very famous carnitas restaurant, Vicente.  The gentleman who owns these restaurants (we were told there are six in total) named them after his friend, a very famous ranchero singer Vicente Fernandez.  The carnitas were deservedly famous.  We also had quesadillas, a gorditos (a sort of fat corn tortilla filled with shredded pork) and a sort of soup called Cowboy Beans that my DH would adore.  (I liked them fine but I am not the bean lover my DH is.) 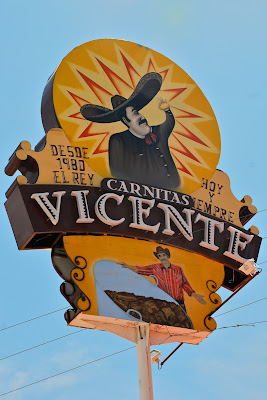 Nonie and Eftain at Vicente Carnitas Restaurant, enjoying the food (and the music). 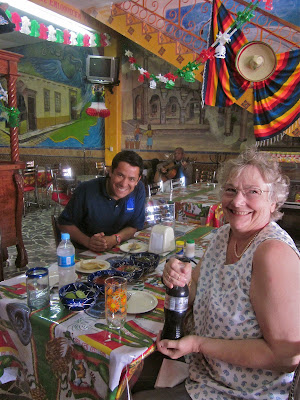 I have to show off the Talavera I have fallen in love with.  Nonie and I stumbled onto the Galeria Quinta Irma (owned and run by David and Jessica Vazquez and his parents) on our first outing here in San Miguel.  We both found many items that really appealed.  I have purchased several items, including the two platters pictured above, and also a beautiful, vivid red spoon rest.  The quality of their Talavera is the very best I have seen, either here in San Miguel or in Dolores Hidalgo.  David's father (sorry, I didn't catch his name the other afternoon) told me that they are licensed to be genuine Talavera producers by the Mexican government and there are stringent rules to follow to be able to say your product is true and original Talavera.   Besides the ceramics, there are some wonderful paintings done by various members of the family in the gallery.  Nonie is really thinking of buying one by David, called Sirena.  More about that later, if she submits to the Siren's song. 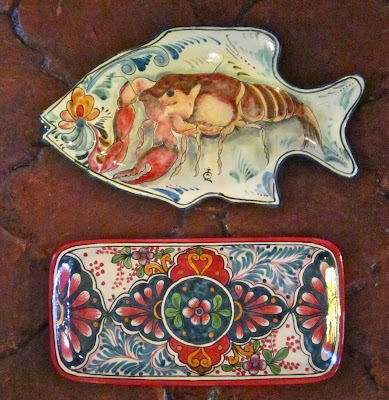 Disclaimer:  If I have gotten any of the history of Mexico wrong, the fault is completely mine, and mine alone,  and I sincerely apologize.
Posted by Michele R. Unger at 8:02 PM

This brings back such wonderful memories. I have a photo of three dear friends and me standing on the front stairs of that beautiful church.