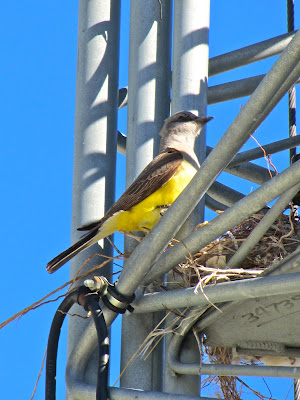 This Western Kingbird is nesting in my husband's ham radio tower at the cabin in Eastern Washington. Neither of us knew what sort of birdie it was until I looked it up.  Reading the sentence, "Both species are aggressive toward intruders near their nests, often attacking much larger birds,"* I knew I'd found the right one in the bird book.  The parents kept squawking and flying about, throwing hissy fits, whenever I approached my car.  Apparently I had parked well within their territory.  It was, I promise  you, inadvertent.  I really take no pleasure in torturing birds! 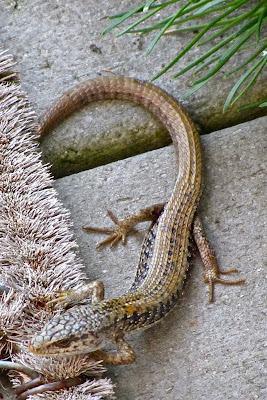 This little fellow is often to be found on the front porch of my cabin in Western Washington, in the foothills of the Cascade mountains.  I do know know if it is a salamander, a newt or (maybe) a skink.  I don't really think it's a skink as they have blue tails, if I remember correctly.  The book I need to look up this fellow is, of course, at the cabin....

If you, dear Reader, might know the identity of this little fellow, please let me know! 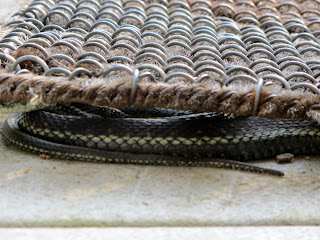 And then we come to this fellow.....anyone who knows me will know that this fellow, curled up under my doormat, is not my favorite of all of God's creatures.  In fact, it is right at the top of the list of my least favorite creatures. 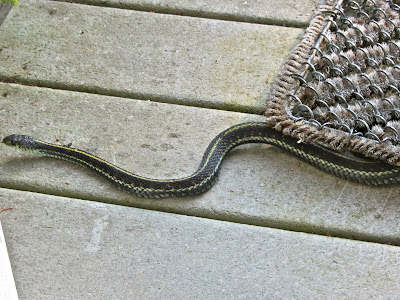 Let me say, in my defense, that having such a healthy and plump garter snake living in my garden is a good thing.  I know that.  I know it eats all sorts of things I would rather not have in my garden (or in my house, for that matter!).  But on the porch?  Two days in a row?  Sunning itself in the late afternoon, just where I am bound to throw open the door and start to bound outside only to come to a painfully immediate stop when the snake is spotted?  Really?

He is quite a pretty snake, if you like that sort of thing  Again, the book I need to identify the actual species of garter snake is, alas, on the other side to the porch...I think it's a common garter snake, but I could very easily be wrong. 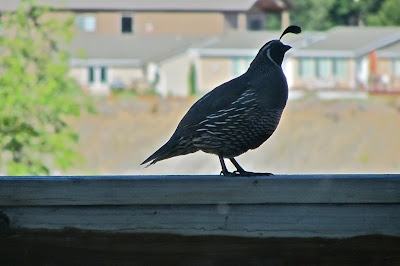 And back to the east side of the state, we have this lovely quail, who was standing on the railing at my husband's cabin the other morning, shrieking at me.  I am still not clear what I was supposed to be doing for it, or not doing for it.  I was inside, it was outside.....go figure.  Very elegant profile, however.  I love their topknots!

*Birds of the Puget Sound Region by Bob Morse, Tom Aversa, and Hal Opperman, published by the R. W. Morse Company, Olympia, Washington, 2003.
Posted by Michele R. Unger at 8:44 AM

The first bird is a colourful determined looking fellow. The last one looks like he's having a bad hair day. The lizard is pretty and I have the same attitude towards the slithery snake. Many of ours are deadly.

I love your KINGBIRD. So pretty.