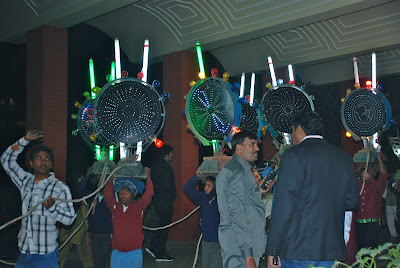 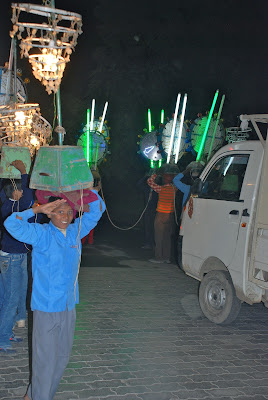 One evening, as we returned from a dinner at a local restaurant, we arrived back at our hotel just in time for the groom's party to arrive at the front entrance.  There were people carrying lights on their heads, followed closely by a brass band.  I had never, ever seen such a sight as a group of people walking behind a truck with a generator, with lights on their heads and wires running to the generator.  It was quite surprising, but very festive! 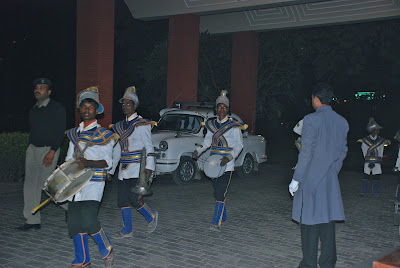 The band was loud and quite good.  The music for the arrival of the bride and groom at (Hindu) Indian weddings seems to require brass instruments and lots of drums.  Being a fan of both, I really enjoyed this.

The following photos are really not up to snuff, in terms of color and focus, but I was, after all, spying on this wedding and taking photos in the dark from far away....please, Dear Reader, forgive the bad photography and just join me here in the dark, behind this potted palm.... 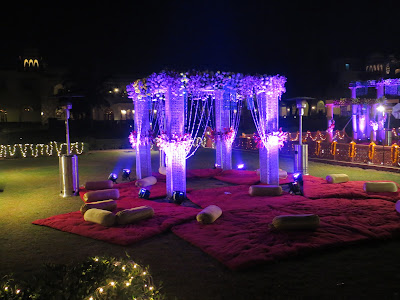 This marquee was set up on the lawn of our hotel.  It was quite lovely. 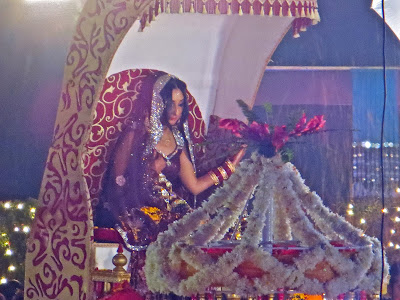 Here we have the bride arriving in a carriage-like contraption, that was being pulled by men in livery!  She was a beautiful girl in a stunning red sari that films purple because of the light and the distance and the fact that I was, indeed, hiding behind a potted palm.... 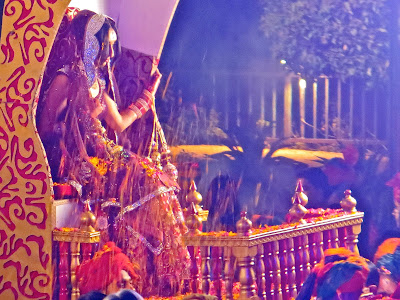 The lovely bride exited from her conveyance and was escorted onto a stage.  The stage had lights like you'd find at a rock and roll concert....big can lights up on scaffolding.  There was a giant TV screen set up, too, and the entire evening was being filmed and projected onto the screen.  Unfortunately, from my vantage point I could not see the front of the screen.  Rats! 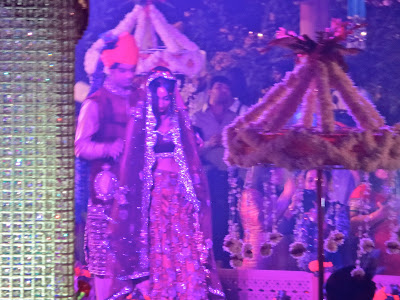 Here we have the bride putting an elaborate garland around the neck of the groom.  I was told that the groom does not want to bow down his head for his lady to be able to easily garland him, as that would show that she would be the one calling the shots in the couple.  The bride, of course, is trying to get the groom to bow down his head.... 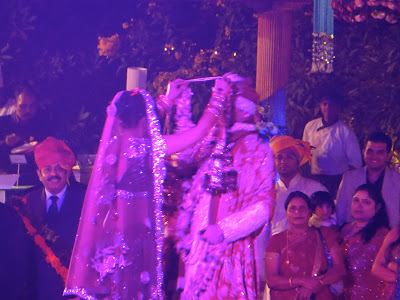 Our young couple here came to a sort of a compromise.  She stood on tip-toe and he inclined his head, slightly. 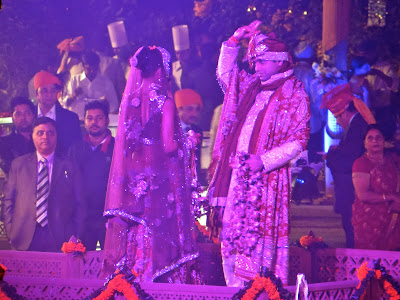 At every turn there was much fussing with the clothing of both the bride and groom by attendants. 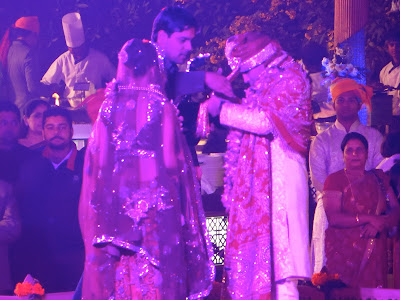 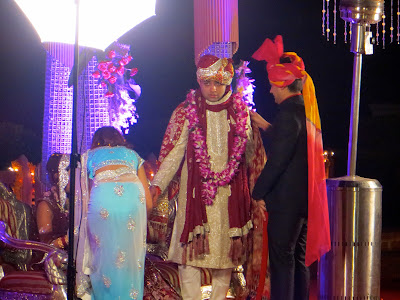 The lady in the turquoise blue sari is the bride's sister, her main attendant.  She fussed and primped and tweaked the bride, for a loooooooooong time, to get the veil and the sari, the garland and jewelry and every bit of the bride's garb just right. 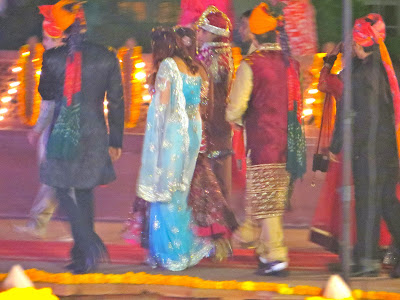 The bride and groom have had their horoscopes cast and the actual time of the wedding ceremony is determined by the astrologer.  It might be at 2:56 AM.  The bride and groom are actually married when they have completed seven circles around a scared fire, that being the equivalent to our saying, "I do." 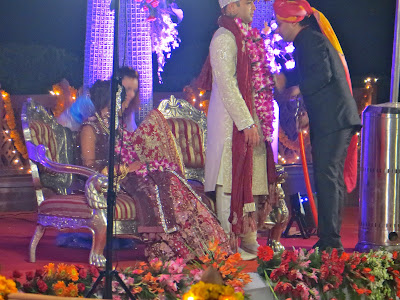 I did not see them actually get married as I got cold and I felt silly, hiding there behind the palm.  Besides, they were just sitting on their silver love seat on the stage, accepting well wishes from guests.  That went on for a long time, too.  So I went off to my bed.  The wedding was still going strong at 3 AM.  I'm not sure when it all, finally, finished up.  I was dead asleep.

Several of our tour members ran into the bride's sister in the hallway of the hotel.  It turns out she had gotten married three days earlier than her sister.  Both sisters (and their new husbands) live and work in the US, and the young lady in the turquoise sari lives only about 30 miles from me!  Talk about a small world.

I certainly wish both young couples all joy and happiness.
Posted by Michele R. Unger at 11:36 PM

An interesting peek into their customs. Do you know if the marriages are arranged?

I saw your comment and birthday wish to Mary Ann Moss and loved it and you said so much there that it touched my heart as does your blog here. I am so glad I took the time to come in and peek. Thank you.