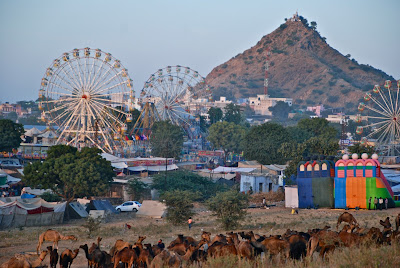 It was maybe 20 years ago that I read something about the Pushkar Camel Fair.  It wasn't a long article, but it mentioned it was in Rajasthan and that many, many camels were traded and that there were camel races and it was held once a year.  All this I remember from that little article all those years ago.  When I saw that my alumni association was offering a trip to India to go to the Pushkar Camel Fair, I could hardly wait to sign up. 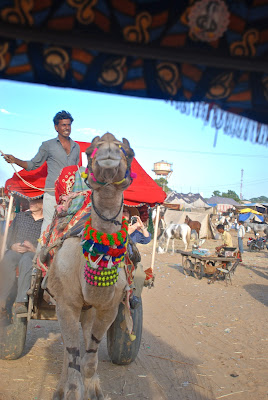 We rode around on camel carts, gawking and gaping and trying to take it all in, that first afternoon at the fair.  It was everything I thought it would be, from dusty and hot to exotic and amazing and colorful. 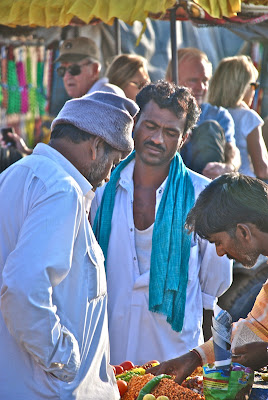 In many regards it is not that different from a good old American state fair.  You have animals.  You  have large crowds.  You have vendors selling the latest geegaw.  You have fair food booths.  There are children running wild everywhere.  It's colorful, noisy, smelly, exciting and really, really fun.  You could say that the Pushkar Fair is a sort of second cousin to the Western Washington State Fair, the one I am most familiar with. 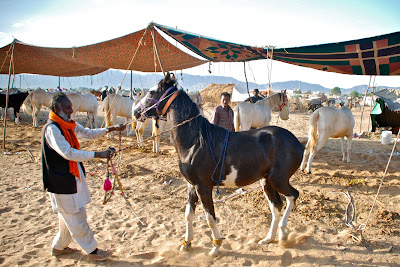 Many animals are traded at the Pushkar Fair.  Horses and camels.  Mostly camels.  If it's been a good year and the harvest was good, many people come and bring big herds of camels to sell or trade.  They have a little extra money from the good harvest and off to the fair they go.  And this year, o lucky me, it was an excellent harvest! 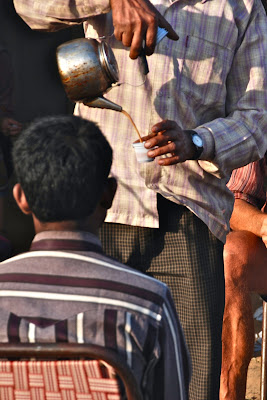 What was different was that mostly the fair attendees were men.  I don't mean that there weren't women there, there certainly were, but the men greatly out numbered the women.  The men tended to sit around in groups, drinking tea and talking camels.  (I am guessing they were talking camel, or maybe horses, and whatever else Rajasthani men discuss over a cup of milk tea in the afternoon.) 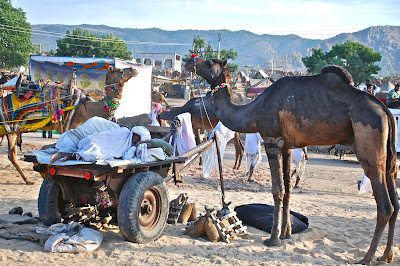 A few thought it a good idea to catch a nap before darkness fell and all the nighttime festivities started.  (Whatever they were....I wasn't there at night so I don't know.) 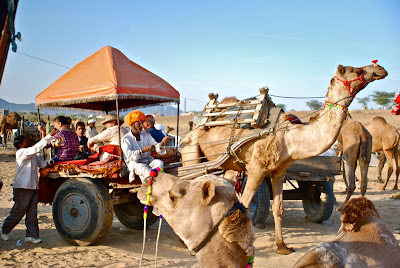 There were a surprising number of tourists there, too, and most of us were riding around on the camel carts.  The carts were pretty nice, too.  They had canopies and cushions and some had side walls and most were decorated to make them festive and desirable to hire.  Some of the camels, too, were all decked out in camel finery.  Some had ankle bracelets of many, many bells.  There were brightly colored halters and netting that was thrown over the backs of the camels.  Some had tassels and tinsel and all manner of decorations.  And then there were camels with patterns cut into their fur.  And designs painted on.  Camels in India get to get gussied up! 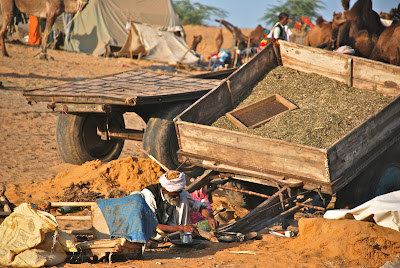 You could buy camel food, and grain and whatever you might need to take care of your livestock. 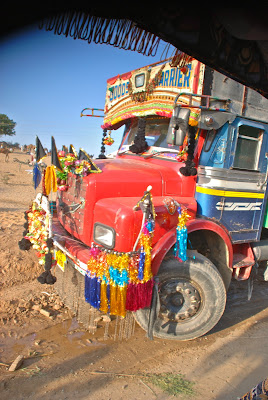 Even the trucks were decorated! 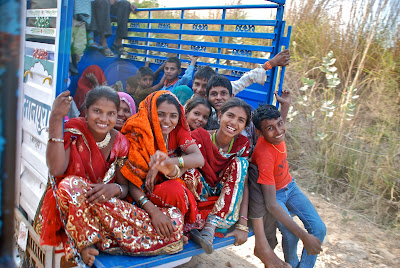 There was this one truck that passed my camel cart by full of beautiful young ladies, all decked out in their most festive saris and shawls.  They, too, were having a great time at the Fair. 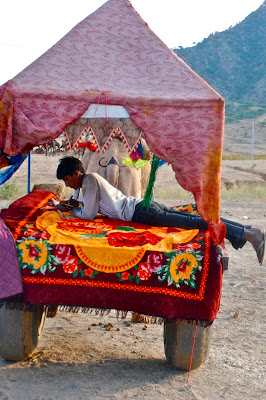 This fellow took a break in his cart to read in the late afternoon. 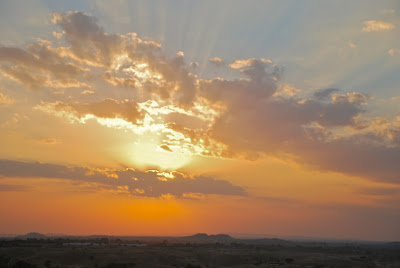 The sun started to set and the sky was amazing.  Fires were being lit all over the grounds as people began to cook their evening meal and make more tea, and to have a nice campfire to sit around and chat and sing and tell stories.  I'm guessing about that, but that's what I would have been doing, had I been able to stay all night long. 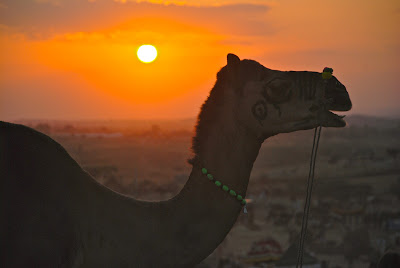 The only way my tour guide was able to drag me away from the Fair was the promise that I was going to be able to return the next day.  Stay tuned.  There's more!
Posted by Michele R. Unger at 12:34 AM

That last shot took my breath away. What an adventure. I loved the clothing of the women; like a dream. And camels. Strange animals, what could they be thinking? John says they are very crabby and dislike humans. I wonder. And the people ... speaking english or something else? My imaginations fails to fill in the blanks. But it looks wonderful. xo

You have really captured the colour, excitement and activities of the fair.You sound as if you enjoyed it very much.