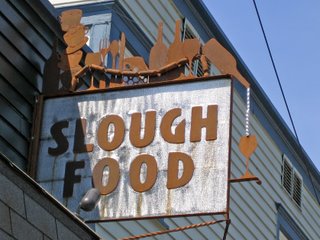 Susan P's birthday 'sleep-over' at Grant Creek, with Sandi from Wenatchee in tow, turned out to be a lot of fun. They arrived around one on Tuesday, horn honking all the way from the gully, in a cloud of dust. It was near 90 degrees and a glorious day. We talked and talked and talked. I haven't seen Sandi since she got back from AZ. Actually, I hadn't seen Sandi since around Thanksgiving! She was perky and bubbly and happy as ever. Susan was in full Birthday Princess mode, and declared the GC B&B a fine place to go for one's birthday. Let's see, that must have been #64. We did a flank steak on the BBQ, had some grilled asparagus to go with, and finished the meal off with Italian style apple cake. Susan seemed happy.

Wednesday we got up pretty early and headed east to Darrington, where we had a wonderful pork product of choice and egg breakfast at Skidder's. Susan and I love Skidder's. It's an old timey bar with great food and lots of 'atmosphere'. It has obviously been sold since the last time I was there as it's been painted and fixed up, but not too much. It's still Skidder's. And the food was great as was the service. If you are out Darrington way, stop in and try the biscuits and gravy---it'll plug up your arteries but you'll die happy. 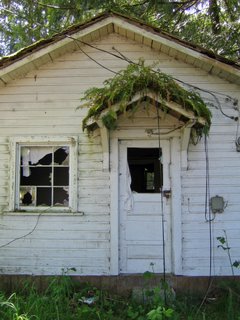 Stopped at a place we'd been before and bought a bunch of plants. There is this nice younger woman who has a sort of hand-built hippie looking studio and man, oh man, does that girl have a green thumb. We all got some great plants for a great price, including two huge, healthy hostas for me. I'd have had to spend three times as much for hostas that large at a nursery in town. They will go out back in Edmonds.....I bought some clay tools from this young woman a few years back. She seems to always be selling something and I bet she was happy to have had us show up. She must have made close to $50 from the three of us.

From there we headed west and took Highway 9 north to Sedro Woolley, then headed towards Bow and Edison. A month or two ago in Seattle magazine was an article with ten out of the way places to visit in Washington State. (I'd been to eight of the ten....Edison was the one on the list I hadn't been to that I wanted to see, the other place just didn't interest me). In the article it spoke of a specialty food store in Edison that sold great wines, cheeses and all sorts of imported food stuffs. The owner, John DeGloria, was quoted as calling Edison 'centrally isolated'. That really caught my fancy and the term has stuck with me since reading about the little shop. It is centrally isolated but it is truly a great little place. Besides, I love the pun of the shop's name. Love those puns, especially when they relate to food. ("Doc Chen's....even the Ham is Cured!" at Raffles in Singapore is my all-time favorite.) We bought some cheese to try and each of us seemed to leave with a little something else to take home to try later. Susan bought a grilling cheese from Corsica that was good. We grilled it on the BBQ and declared it worthy of a cracker. There was a good bakery in Edison, too, called The Bread Farm. Edison turned out to be very photogenic and full of good eats. I will be heading back there before too long! 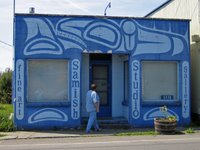 It's been a momentous week for the family. Good things, but big things. Emma is now sleeping in her new house in a big girl bed. Gulp. How can she be big enough for that? Jen is off to London and Paris and left SF this afternoon. She'll be gone about ten days. Annie turns thirty tomorrow. Annie sent me some great photos of Alex...One of her naked (but wearing her glasses) is my favorite. She is just the cutest little ting and looks so involved and interested in everything around her. Wish I could see more of her, but oh, well. Kelley and Don are celebrating their first full week in their remodeled house tomorrow. Don did a fantastic job on that place and I am so very, very impressed with him and his ability to learn new skills and put them to practice. I am just slogging away trying to keep up with the volunteers for the arts festival. So far, so good. Connie is happily over in Eastern Washington, weed whacking with is new weed whacker. We are all good and that makes my life grand.

Don McK had everything at Grant Creek looking picture perfect. The weather was amazing, hot and sunny, and all the plants are exploding out of the ground. I have my lettuce in and tomatoes, peppers and squash, too. The roses are beginning to bloom, the clematis are blooming and I cut an armload of peonies to bring home to Edmonds to enjoy. I won't be able to get up there this weekend, but hope to go up a week from tomorrow, after I do my stint at the Market, trying to drum up volunteers. I'll be doing that very same thing in the morning. It's only three hours. I hope the weather is as nice next time I get up there as it was this week. I also hope that the house is rid of the mice. I saw one this time....bold as brass, moving around while the three of us chatted in the kitchen. I left lots of delicious aqua colored 'nibbles' and asked Don to be sure to check the house for dead mice. I hope there are lots and that will be the last of them inside this summer. I like them in theory, but I hate them in my house! 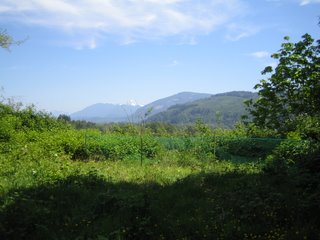