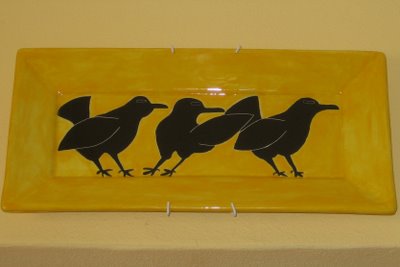 I got my crow platter back from the ceramic painting store and I am quite pleased with the results. The crows look pretty good and I didn't get any chipping when I did the sgriffito technique. Now I think I'll try the same design on some other items. Maybe a vase, maybe a big mug. Something....

The arts festival starts in TEN DAYS. And today I found out I have a voice mail box other than the box I'd been told about and had never had a message in....and guess what? Yep. Four messages and who knows how many I've already missed that have been deleted for just sitting there...unheard, unanswered, unloved? I feel awful but I didn't know! Now, one more thing to do each day. At least I managed to salvage a good lead for the children's area. Jeremy came through with a windfall of volunteers for Thursday, set up day. He wrote and asked if we could use about sixty volunteers? Well, ah.....gee....YES. If we can get a few of them to show up at 7 am Chris will have all the help she needs to get the field organized and a good, efficient unload for the artists rolling. Wouldn't that be sweet? some things seem to be so much better, others seem so much worse. It's just an on-going nightmare and I won't be able to wake up from this one for about two weeks! Aaaargh!

I will not go on and on with this feckless whining, but it's getting bad and will only get worse. Signing on for this job proves beyond a shadow of a doubt that I am incurably insane.

I did get to play over the weekend. It was so wonderful! Nonie and I took old Red Truck for a spin on Saturday, got the old crankcase fluids and oil pumping and flowing, showed off the elegantly dusty ratty paint job and had a good time doing it. We 'dined' at Haggens in Arlington. The sushi wasn't bad and Nonie seemed to like the honey glazed chicken and fried rice. The price was surely right, too. We were so lazy we didn't even go for a walk, although I will admit that the best weather we had all weekend was while we were driving around in Old Red. It poured most of the day yesterday and I got drenched while planting one tomato, three thyme plants and a couple of geraniums. At least no one need worry about watering up there for a while!

Annie reported that Alex was sick over the weekend but has made a full recovery, even if there is a slight lingering cough. At least she won't have to have her eye surgery postponed because of illness. That's scheduled for Thursday.

Tomorrow night we are having a family dinner at Giraldi's for Kellie's birthday. Eunice, Nonie, Don and Kellie, Emma and the old grandparents will all be in attendance. I am looking forward to having us all together for a nice meal that I don't have to fix. I don't have the time or energy (not to mention a house that is decent enough to let folks into!) to cook a dinner right now. Rune is coming over tonight for supper and the poor guy is getting hot dogs and chili! I know that'll please Connie, but I'm not too sure about Rune.

I have accomplished one page this weekend for my art journal and also did a bit of sketching. The journal page took an odd turn. The prompt was "Pink and orange are the navy blue of India" and I rather thought I'd have a bright, happy page to show for my efforts. But, no. I somehow got to thinking about all the poor girls who are burned to death because they didn't bring a big enough dowry in the opinion of their husbands families. I thought about all the women who comitted sati. I kept thinking "women as fuel" and it was very depressing. So the page took a dark turn and I smacked on my handpring right in the middle and cut out two little hands that I used as a border design. I found a poem about sati on the internet, and while it's not my feelings on the subject of ritual (usually enforced) suicide of a widow, it is an opinion that many women may have had, so I used it. Not the cheey page I invisioned. But that's the joy of doing something like this---you can let it lead you where it may.
Posted by Michele R. Unger at 4:19 PM