I kept reading about a no-knead bread recipe on the web and I finally thought I'd give it a try.  I initially used the recipe I found on the Fabulous Beekman Boys website.  It was pretty good, but not exactly what I was hoping for.


I decided that I wanted the bread to be a sourdough so I started looking for a recipe on the web for making my own sour dough starter.  I found this one and tried it.  It worked beautifully and now I have a batch of my homemade starter in the refrigerator, waiting to be used.  I used half whole wheat flour and half bread flour when I made the starter.

I use one cup of my sourdough starter and 1/4 tsp. of King Arthur yeast in my bread recipe.  I mix up the flour I use depending on my mood.  Sometimes it's all whole wheat, sometimes all bread flour or sometimes some of each.  I haven't (yet) tried it with rye flour, but I don't think that would be a problem if you wanted to try it.  This recipe is so darn easy and makes a nice, crusty loaf. 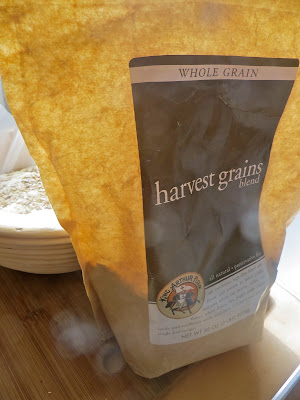 I love the Harvest Grains mix that I purchase from King Arthur Flour.  I add a couple of handfuls to the bread when I mix it up, and I put a sprinkling on top of the bread when it is doing its second rise.  I don't even bother with egg wash or water to hold it to the dough.  By going through the second rise the mix of seeds seems to stick well enough to suit me. 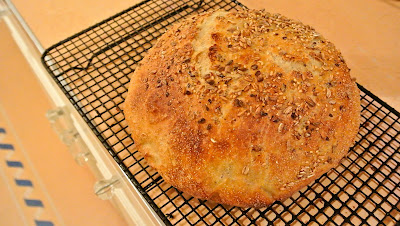 It makes a really lovely loaf.  My DH and I love it and since I started making it, we haven't purchased any store-bought bread!  This suits us just fine.

My Recipe for the Lazy, No-Knead Sourdough Bread

Mix all ingredients together  in a large bowl until the all the flour is mixed into the dough.  It will be quite a wet dough.  You do not knead.  You do not fuss.  You just mix it up well and call it good enough.  Cover the dough with plastic wrap, leaving a bit of the wrap open so the bread can breath.  You can put it in the refrigerator over night to rise.  You can leave it on the counter to rise.  What you need is for the bread to rise at least for 6 hours.  It may not double in size, depending on the type of flour you use and the temperature in your kitchen.  Sometimes mine doubles, sometimes not.  But I always let it rise for at least 6 plus hours.  (If it gets too big too soon, put it in the refrigerator until the six hours has passed.  It needs to rise that long.)

Once it has finished the first rise, get a nice piece of parchment paper and sprinkle on some flour and some corn meal.  Have handy a bowl to put the dough in for the second rise.  This bowl should be approximately the same size as the Dutch oven you will use to bake the bread in.

*Trust me.  Be careful---I have the burn to show for being careless.  Please don't burn yourself!
Posted by Michele R. Unger at 9:48 PM

It's been way too long since I made sourdough bread. I love bread. This one's in my future. Thank you. xo

I have been wanting to start making my bread again, thanks so much for this recipe!

One question: is the bread very sour, or only a little?