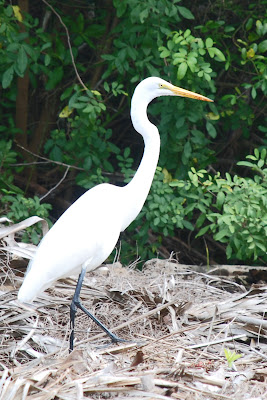 Yesterday was another relaxing day in Paradise. (I know, Dear Reader, you are most possibly getting more than a little tired of hearing me go on and on about Paradise!) There were more birds and again, they were willing to pose for photographs. The egret was hunting for supper about two lots down the road from my rental house and was kind enough to just stand there while I took many shots. I didn't even have to get out of the golf cart to take them, either 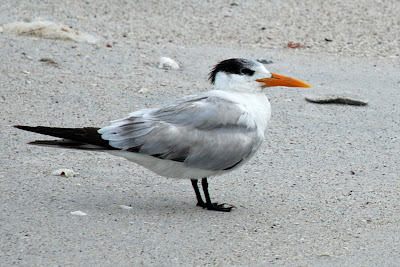 This is, I think, a Royal tern. Either I am not very intimidating or I look very fat and slow, because this guy couldn't be bothered to even move away from me in the slightest. I walked right past him in the end. 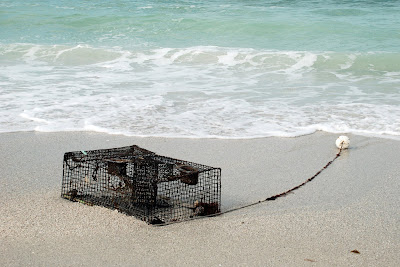 Big waves again all day yesterday. Several crab pots had washed ashore. This one had a few crabs in it and the prettiest one I fished out and photographed. I tried to set the crab free after our photo session but found him washed up ashore again on my walk back, missing most of his legs. 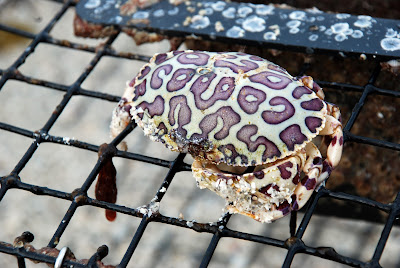 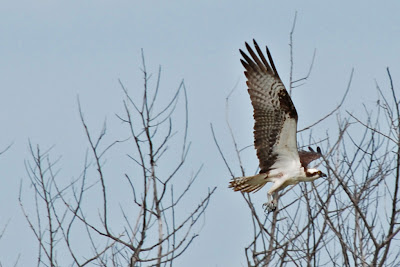 There are osprey nests everywhere and sometimes I can spot ten or twelve osprey flying at one time. There is a snag on the beach on the way to the State Lands where you will often see one perched. Whether or not the bird is hunting or just enjoying the view, I don't know. 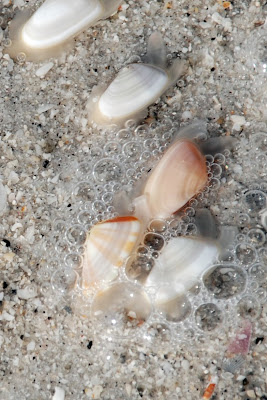 These little shells are called coquinas and come in a multitude of colors. They live in the wet sand near the surf line and let the waves move them up or down the beach as required. If you look at the photo closely you'll see two siphon tubes---one tube for "in" (filtering out the plankton that is their main source of food) and one tube for "out" (expelling the water). As a wave recedes you'll see them scattered across the top of the sand and then, POOF!, they upend themselves and dig down into the sand. By the time the next wave appears, they've gone down into the sand. Note: According to the book Florida's Fabulous Seashells, coquinas make a very good broth....of course, you need several quarts of the little guys and I have much better things to do with my time than gather quarts of these things! After all, I have shrimp in the frig!

But, hey, for those of you who don't have more pressing chores looming ahead of you today, and you have the beach that is providing the coquinas, here's the recipe, straight from Florida's Fabulous Seashells, by Winston Williams, copyright 1988 by World Publications, page 8:

Collect several quarts of coquinas. Make sure they are all alive and that there are no other types of shells mixed in which might not be live and fresh. Rinse well to remove any algae or debris. cover in a pot with about 1/2" of water. Add a little pepper, a little butter, and a couple of tablespoons of sherry. Boil for 5 minutes. Strain out the shells and serve the broth.

Some people use toothpicks to remove the meat from the shells, but this is tedious and not very rewarding. Coquinas are really best for broth, not chowder, and the broth can be used as a tasty soup stock or base for other dishes. 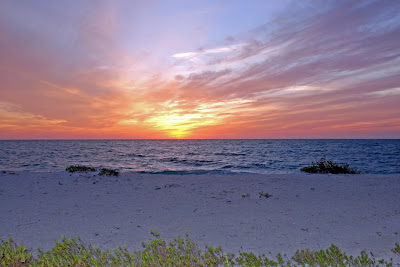