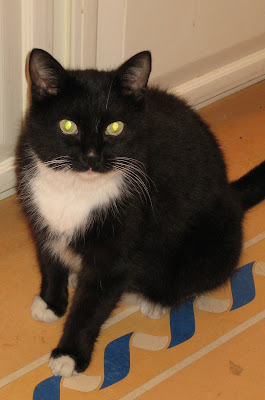 I have a little tuxedo cat named Orcie. Actually it's Orca, but he's Orcie to me. I've had him since he was a kitten, ten years now. He was the runt of a litter that was about to be put down. He's a rescue cat, I guess. Mostly he owns me.
He does not like little children so my grandbabies have been raised to call him The Great And Terrible Uncle Orcie and to give him his space. They never try to pick him up and are strongly advised to ignore him completely. Needless to say, Orcie did not enjoy the visit last month of my daughter and her family nor did he take well to having Emma stay with us as well.
And now he is sick and is at the vet. He’ll be there until at least tomorrow morning. Kate doesn’t know what’s up with him….many things it could be but it does not appear to be his asthma. They will do tests and let me know what they find out (or don’t find out) tonight. Tomorrow may require an x-ray or two, but that remains to be seen. Kate told me “not to lose sleep over this just yet.” I am trying to be brave.

How can one silly old woman love a small, ten pound grumpy cat so much?
Posted by Michele R. Unger at 2:34 PM

Remember me from Art and Soul last year? I just saw your blogspot on the database list for A and S and decided to check it out. I'm glad Orcie is back home. We have our Smokey Cat (known as "Mokers" to our 18 month old granddaughter), who is granted huge amounts of respect from one and all.