The second in a series of posts chronicling my Caribbean sojourn in March, 2009 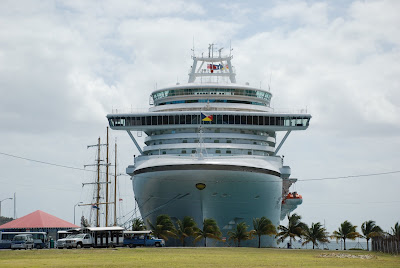 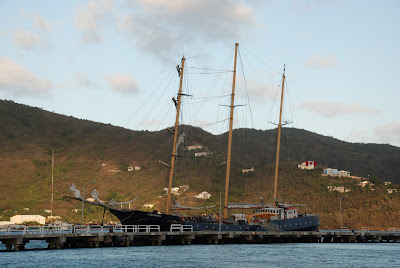 No, silly, not that HUGE white thing, but off to the left, that one! The one with the three masts. YES! That one! That's the Caledonia, my home for two blissful weeks. She's not very big (compared to a big cruise ship), but big enough to house more fun than I thought possible. 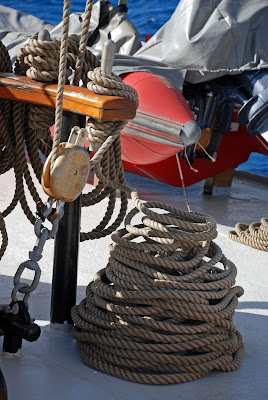 The SV Caledonia is the best ship on which I have ever traveled. From the Captain and the crew, the accommodations, the daily special afternoon cocktail and the food, the itinerary, and the sheer joy of a sailing ship beating downwind with you aboard, the wind singing in the rigging, it was a non-stop perfect trip from start to finish. There were great shore excursions. On board you had the opportunity to learn a bit about sailing from the boson, there were talks about islands we would be visiting, we enjoyed several musical nights (reggae and ska)and for the bold, you were allowed to climb up into the rigging as far as your nerve would let you. 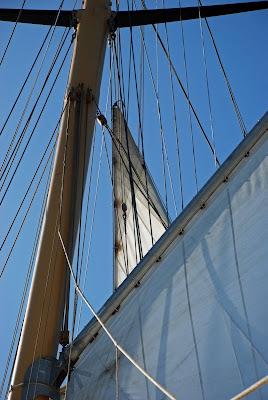 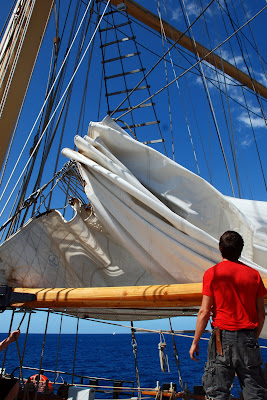 Nonie and I both climbed up to the first yardarm, but being short, we were sort of stymied at that point as old knees and legs don't like to make the convolutions required to climb higher. It was much easier to climb out into the nets on either side of the bow sprint. What an amazing way to travel-----the waves breaking at the bow, the wind, the view! We were even blessed with dolphins riding out bow wake while we were in the nets. Magical! 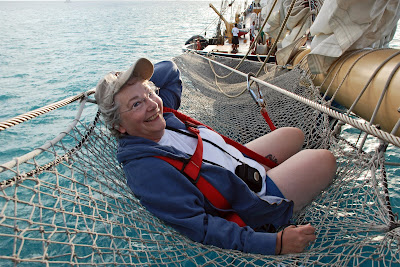 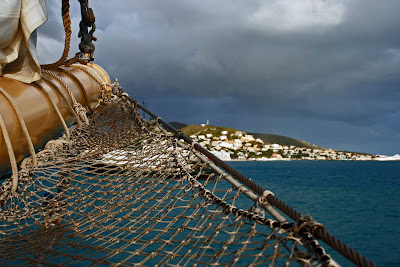 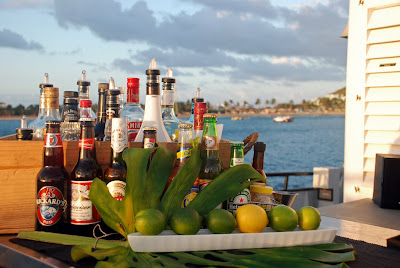 Everything was ship shape, clean and comfortable. I spent countless hours just sitting on deck, watching the deck crew, looking for flying fish, watching the clouds and the moods of the Caribbean. Although our cabin had a DVD player and there were many DVDs in the library from which to choose, we never even thought of watching something. There was simply too much to do just being aboard the Caledonia.
If you get the chance, be sure to sail a week or more aboard the Caledonia. You won't be sorry! 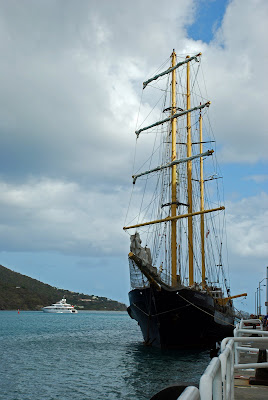 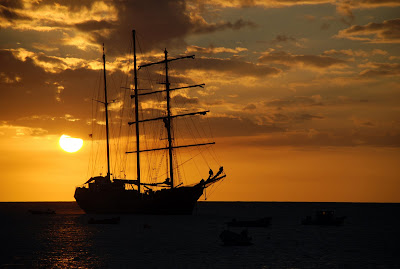 Wow. You are adventurous. Your photos are fabulous especially the sunset. It does look a lot of fun but did it rock and roll in bad weather? Tell me you flew there and then picked up the ship. You didn't sail in it from the states did you?

Hi Michele,
I loved the last post, but the Caledonia has me captivated!! I love the look of it, and I can imagine flying along in one of the nets! Hope I can do it some day!!

I'm so glad you've started sharing these. The trip looks amazing and the photos are priceless (especially the last one). I can't wait to share photos from my September trip to Cabo and my October trip to Egypt, but first I have to go.

That cruise ship is scary. : ) Perfect photos, as always!!!

These posts are KILLING me. Seriously.

MORE MORE MORE!!! Nonie has a sweet face. it's good to have a traveling partner with whom you can go on adventures!