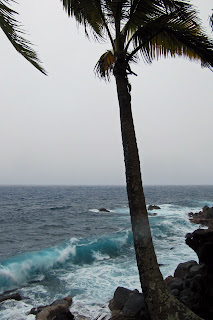 We woke to rain squalls and the "coldest" weather we have had since landing in the Hawaiian Islands. Not that it was "cold" but rather that it wasn't as warm as it usually was! 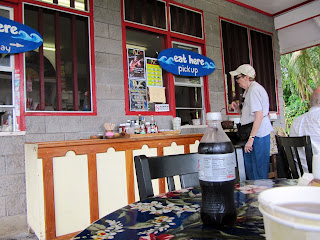 We drove the old road, Highway 132 (sometimes called the Red Road), to the end. Where the road used to continue on there is now a very large lava flow. Under the large lava flow is the village of Kalapana. I find it so sad but fascinating that whole towns are just gone. My heart hurts for the people who called Kalapana (and Kapoho, where we are staying, that village is gone, too) their home. There is now a parking lot and a very lovely little restaurant at our end of the road. We took the walk out onto the lava field to the ocean but when we came back we stopped at the Kalapana Village Cafe for lunch. The food was great, the service was friendly and the setting is beautiful. This little place bills itself as "The place where the road ends and Aloha begins." I agree. 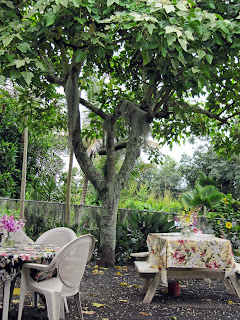 The walk from the parking lot to the ocean is very interesting. The lava flow happened in the 1990s and you get a really good idea of how the vegetation begins to come back and in what time frame from taking the walk. Ferns and small trees, the occasional flowering plant, all were small but seemed to be thriving. 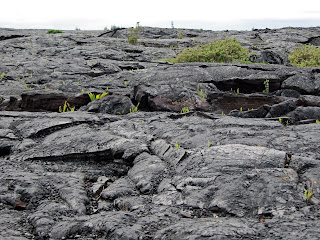 There are many coconut palms that have been planted along the walk. Nola read somewhere that a local Kalapana lady, who was dying of cancer, brought lots of the coconuts to start to replant the lava flow were her village had once stood. She encouraged others to do the same and now there are lots of the little palms growing on either side of the walkway. She has died but others are still planting the palms to honor her and the village under the lava flow. 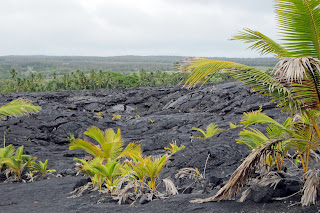 All the shapes of the lava are just fascinating and are caused by the speed of the cooling of the lava as it makes its way to the sea. 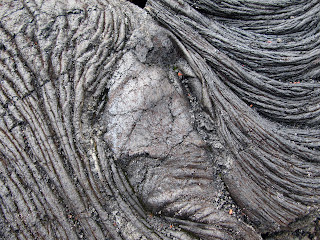 When we got to the sea we found one of Hawai'i's famous black sand beaches. Because of the weather, we dared not to go into the water, but it was wild and beautiful there. 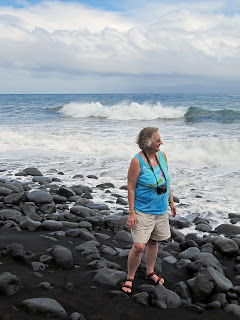 Nonie at the black sand beach. 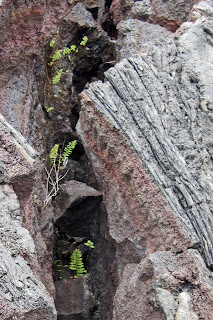 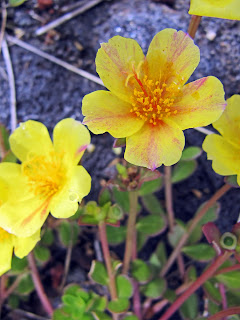 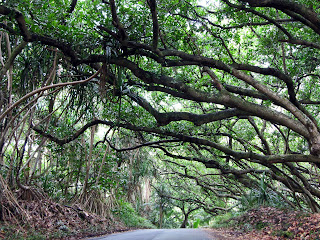 This beautiful stretch of road became Nonie and my favorite drive. The trees arching over the roadway make a lovely, green tunnel. 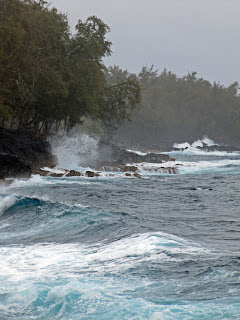 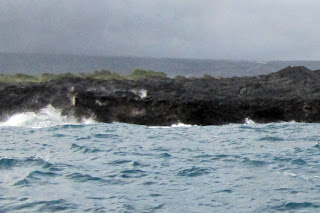 The photo below shows some steam venting from the cliffs along the ocean, south of the Kalapana Village Cafe. We took a lava boat tour that turned out to be the only miserable thing we did the whole time we were in the Islands. DO NOT TAKE A LAVA BOAT TOUR UNLESS YOU HAVE VERIFIED THAT LAVA IS FLOWING INTO THE OCEAN. We did, alas, not check but took the word of the tour operator. You can check, I now know, by calling 961-8093, which is a local call from anywhere on the Big Island. There are a lot of sleazy tour operators who will claim much and deliver little. We'd had such good experiences everywhere else in Hawaii we fell for this crummy outfit. There were NO life vests in sight on the boat. It was horribly rough, really rough, and I knew I would get seasick (oh, boy howdy, did I!) but going out in that rough weather was my choice. What I am unhappy about is that we got no info from the captain during the "cruise." He was silent as we bobbed about in at least 5 foot seas for about 45 minutes, waiting for sunset. We did see the hillside with lots of red, glowing dots that showed how the lava was working its way downhill from higher up on the slopes of Kilauea. I thought the captain was not very concerned with the care and comfort of his passengers, that he made an unnecessarily hard passage back to the launch point but that he was obviously skilled at handling his boat in the local waters, no matter how rough. The entry into the boat ramp at Issac Hale park looks to be very tricky under optimum conditions and believe me, when we came in on Tuesday night, it was NOT optimum, but he made it look easy. I just think he was bored by the whole tour and wanted to get home to the comfort of his house (and probably a beer or two). In all things, Dear Reader, I am old enough to know you get what you pay for. Do not, repeat DO NOT use http://www.bigislandlavaboat.com/. They claim to be the cheapest lava boat tour on the island and they probably are...and they are awful. Check around if you really want to see lava entering the ocean, be mindful of the weather and call the hotline to verify that there are ocean entries of lava on the day you chose to go.
Caveat emptor! 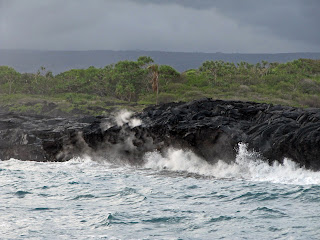 Another shot of the steam along the ocean cliffs. No sign of lava. 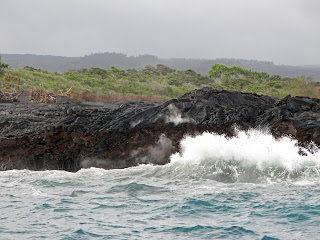 Of all the photos I took while on the lava boat "tour" these are the only three that are usable. It was too rough to get a decent shot at night and there were only red dots on a far away hillside to see, anyway.
Next time I'll show you where and how to spend your lava viewing dollar, if you want to see lava up close and personal.
Posted by Michele R. Unger at 2:04 PM

You were brave to even consider going out to sea in that weather and to get ripped off as well must have been annoying.