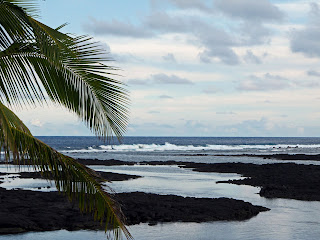 On Friday we flew from Honolulu on Oahu to Hilo on the big island of Hawai'i. It was only about a 50 minute flight but in a sense, it was like flying back in time. The eastern side of the Big Island is sparsely populated and although Hilo is listed as the second largest city County. I read somewhere that Hilo is like Honolulu before the jets arrived and that about sums it up! I like the slower pace and the not-so-touristy feel. 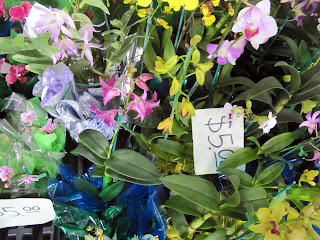 Yesterday we spent a good part of the day in Hilo. We went to the Farmers' Market in the morning and then to the Chinese New Year celebration. Hilo's Farmers' Market is a big one, full of an amazing collection of booths and stalls, selling everything from fresh organic fruits and veggies to prepared foods and baked goods. There are jewelry stalls and Kona coffee is on sale. If you can't find something to buy here, you're just not trying! 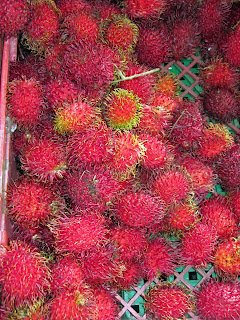 We bought some rambutan on the advice of a couple of tourists and we certainly weren't disappointed. You cut through the outside shell to reveal a white inner fruit with a big seed in the middle. It is rather citrus in flavor....well, it's tropical and sweet and very tasty! I can highly recommend them even if I can't explain exactly how they taste! 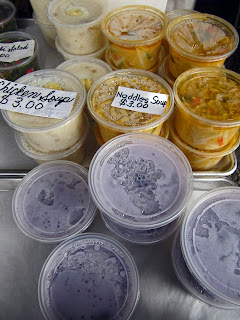 Many of the food stalls were selling prepared foods of all descriptions. This beautiful lavender colored tapioca soup caught my eye, along with the "noddles" soup. It looked really good. 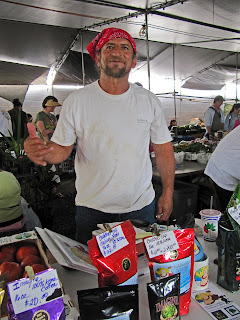 I bought a pound of Kona coffee from this fellow. His brand is called Buddha's Cup. How can you resist that? 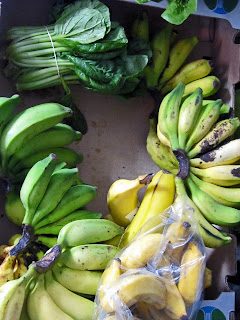 There were lots of fruits and veggies one of which was an apple banana. I have no idea what that banana actually tastes like, but I could hazard a guess..... 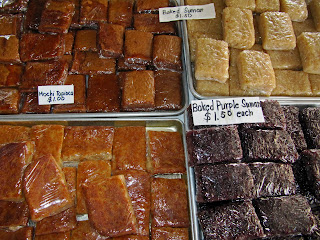 Oh, how much I wanted to buy some mochi! I love, love, LOVE mochi but having made it myeslf I know it is about half sugar. Not exactly on this diabetics menu. 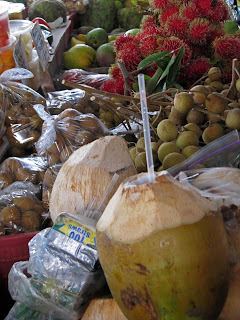 Everything looked so good! I could have just grazed my way though the market. I did get some locally made chevre, cherry tomatoes and sugar snap peas that we had for our pupus before dinner. 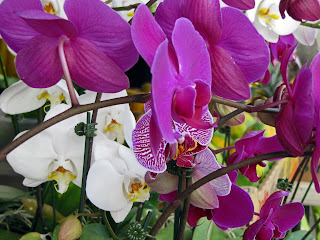 But, to be totally honest, I think what "hurt" me the most were all the orchids for sale. Prices were between $ and $8 for the most gorgeous orchids I have ever seen. I was foaming at the mouth with orchid envy. If I lived here there would be no room for furniture in my house as it would be filled, from top to bottom, with orchids. 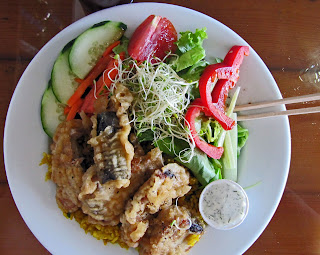 We had lunch at Puka Puka Kitchen, a tiny little restaurant we discovered yesterday, right smack dab next to the Hawaiian Candy Company (an evil shop if ever there was one). On Friday I had the lamb pita and it was fine. Yesterday I had the ahi don plate and it, too, was really tasty. VERY tasty. The salad that accompanies the main course is crisp and fresh and the tomatoes taste like vine ripened ones, something I hardly ever get anymore. (Even in summer in the Seattle area it's hard to find a vine ripened tomato.) I could happily eat my way through the menu at the Puka Puka Kitchen. 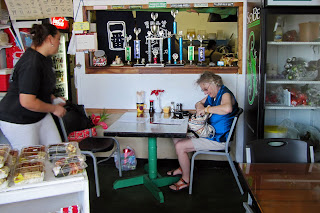 Nonie ordered the lamb pita the first day and the barbecued chicken pita yesterday. She is in complete agreement with me that the food here can't be beat. Nonie even offered to stand out front as their tout, funneling in passersby....but they don't need it. It's a constant stream of locals and visitors, coming in hungry and leaving full and happy. 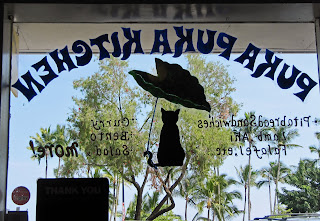 Never did get a photo from the outside as I am always on the inside---eating! 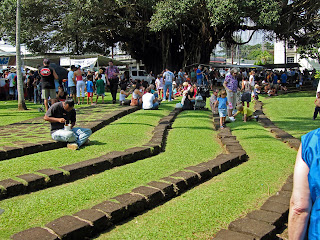 After lunch and another stroll through the market, we headed off to the Chinese New Year celebration in Kalakaua Park. It's a beautiful park just a few blocks from the harbor and yesterday it was jammed with people, food booths, craft stalls and lion dancers! 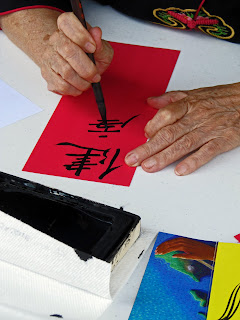 There was a booth where you could get something written in calligraphy for good luck in the coming year. I got a slip of paper that reads "Great Prosperity, Great Wealth" or something close to that. The gentleman and lady who were doing the calligraphy were fun to watch. They were both very precise and careful but each had their own style. 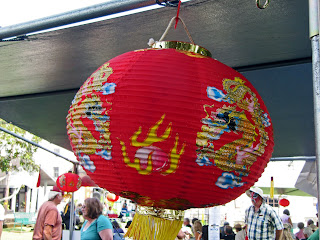 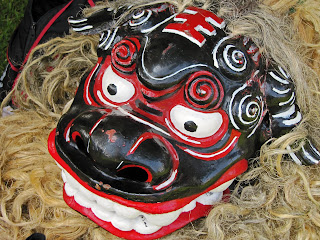 On the drive back to our rental, there is a very beautiful section of road on Highway 132 (or maybe it's Hwy 130---somewhere along there!) that has huge trees arching over the roadway, making a green tunnel for you to drive through. 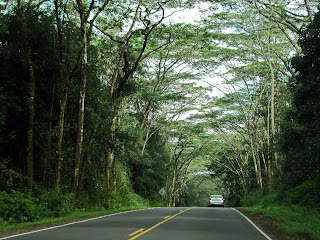 We had a lovely steak and potato dinner on lanai---a fitting end to a beautiful day. 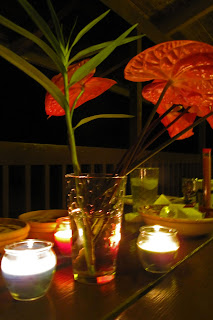 Me too your posts make me hungry. Thanks a lot!