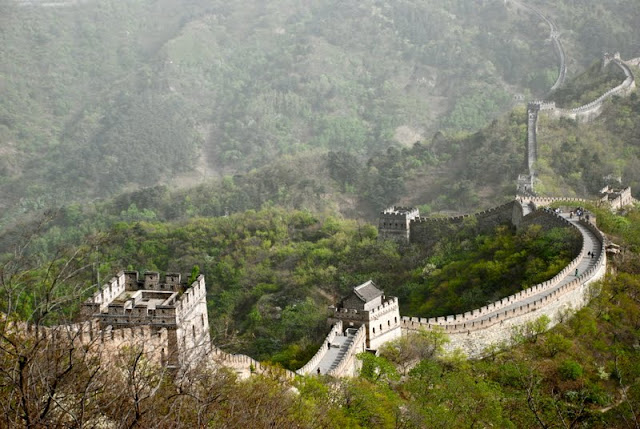 I was just a little girl when I first heard about The Great Wall of China.  I think it was my father who told me about a wall that ran for thousands of miles, all along the mountains and along the flats, to keep out invaders (whatever they were....).  He told me it was made of stone and that you could walk on the top of it and that it even had little houses up top.  I was very taken with the idea of this great wall.  I wanted to see this Great Wall for myself, but there was one big problem-----it was in RED CHINA.

Now, back in the 1950s, little American girls knew that they were never, ever going to be going to RED CHINA.  Never ever.

Oh, how I wanted to go and see that wall.  (I was sort of intrigued with the idea of a red country, too, to tell you the truth.)  But, no, I was not ever going to see that place for myself.

Flash forward about 50 years.  Times change.  People change.  Even governments change (a little) and what was once forbidden becomes common place. 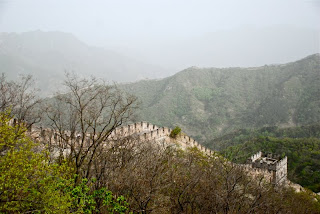 And, finally, finally, I was standing on The Great Wall of China!  It was truly a very emotional moment for me, to realize that I had come all that way and through all those years and I was finally doing something that I had known, with certainty, that I would never be allowed to do.

And yet, there I was, with my feet planted firmly on top of the wall, looking out at more of the wall, running off into the haze---in both directions---as far as the eye could see. 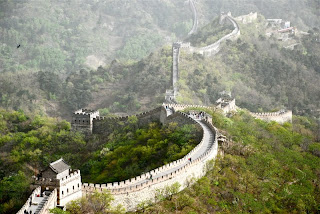 Oh, you see, my Daddy was right.  It was big and it was tall and it was made of stone.  It ran along the top of the ridge, and if the ridge climbed up steeply, so did the wall.  And if the ridge dropped down, steeply or gently, the wall did too.  It was an engineering feat that really impressed my father and he, in turn, impressed upon me that it was really something to have built that wall when it was built, over all those hundreds of years and by all those millions of people, by hand.  They didn't have dump trucks and cranes, cement mixers and re bar and all those things the make modern construction possible.  They had an plan, and stone, and a lot of people and will.  Lots and lots of will.

At least the Emperor(s) had the will and since what the Emperor wanted was all that really counted, it happened.

Stone by stone, inch by inch, mile by mile, year after year, it happened. 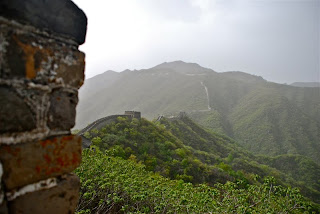 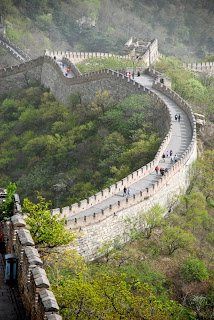 When you think that the Great Wall of China was built by hand, by manpower and will alone, it seems a very mad sort of idea.  And yet....and yet.  You are standing on it.  You can see it running up ridges and down, off into the mists of China, for thousands of miles.  You can see it from space. 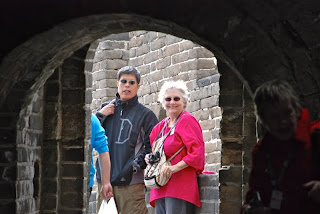 Nonie and Lian, our Beijing guide, framed by the doorway of one of the guard houses 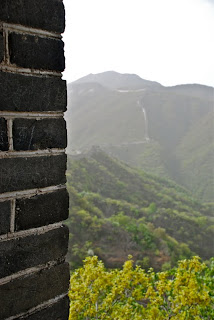 Look carefully at the photo above and you can see the wall running right up the side of that very steep ridge.  Right up the top of the ridge, practically straight up, and over the top and down the other side.  And on and on and on. 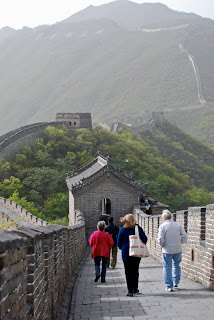 The guard houses are spaced along the wall, and they have windows that look out, usually with wonderful views, and roofs and a little bit of a break from the wind.  The day we were there it was very windy and at times you felt like  you were going to be blown off the wall and go sailing off into the sky, like a Chinese kite.  The haze was really dust from the Gobi, as China was experiencing the first dust storm of the year. 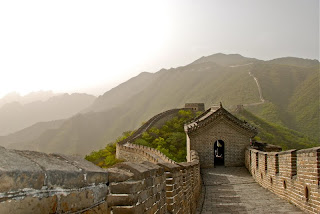 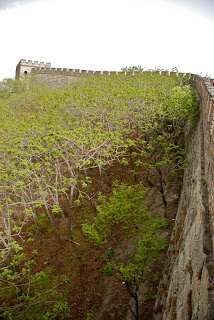 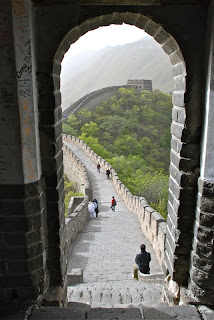 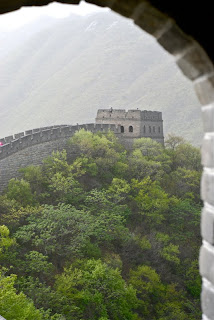 It is beautiful being up on the wall.  The views are stunning and they change so quickly, as you walk along.  It's windy and cold and rather romantic, although I know, for sure, that I would not have wanted to be a guard on the wall during the winter!  You would, quite literally, freeze.  Brrrrrr.  It was chilly enough on the day in May. 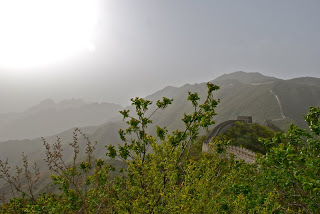 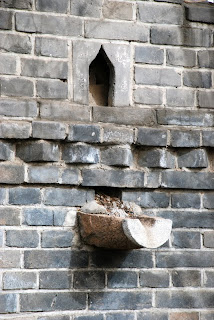 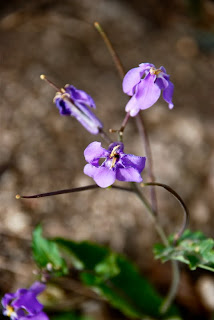 At the bottom of the wall I was rooting around, looking for a couple of rocks to take home as mementos for myself and friends, and there it was.  A tiny little wild violet was growing just at the foot of the wall, in the shelter of its massive stone walls, protected from the wind.  It was tiny and lovely and unexpected.  And perfect. 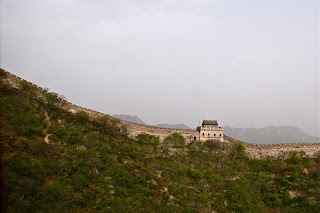 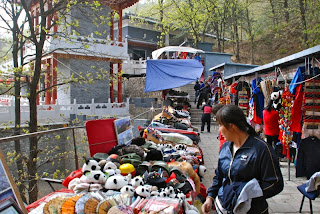 When you return from your time on the wall you come back down to where the local vendors congregate.  They are determined to sell you something, anything, and they are not going to take no for an answer.  While in-your-face sales techniques annoy me to no end, I was struck that here, again, was the collective Chinese will.  They are a determined people and they usually get their way.

Loving your photos of China and hey the new addition to your family is pretty darn cute. Great photo of her too.