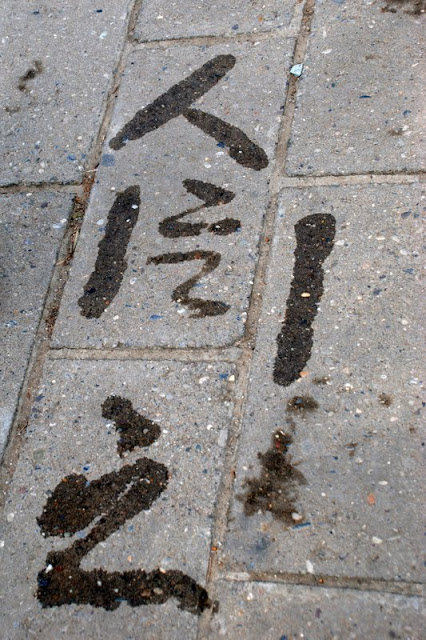 One of the most interesting things we did in Beijing was spend part of a morning in a local park.  It was a beautiful and large park, and I, of course, can't recall the name of the place---but it is near the Temple of Heaven (Tian Tan).  The whole park is a beehive of activity.  This gentleman was practicing his calligraphy buy using a very long-handled brush and plain water on the paving stones.  Clever! 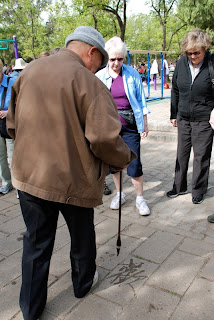 Parks in China have exercise equipment, rather like the gyms many of us in the US belong to, but in China the equipment is outdoors and free (or a very nominal entry fee to the park is charged).   The Chinese government encourages people of all ages to exercise, and in the early morning hours, most parks in China are full of seniors, doing just that.  They use the equipment, they walk, they do tai chi, they use their muscles to keep fit.  You don't see a lot (hardly any!) over weight people in China.  You might see a little plumpness or a bit of a pot belly on an elderly person, but it is not the norm.  I will admit I did see more chubby teenagers than adults.

I felt big as a whale! 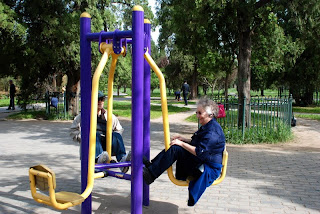 Here we have Nonie, availing herself of one of the pieces of equipment. 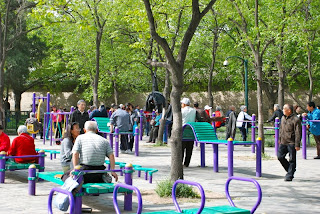 Everywhere in the park, activity.  Each piece of equipment was being used.  It was a busy, busy place. 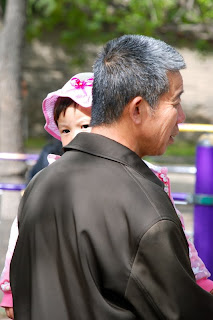 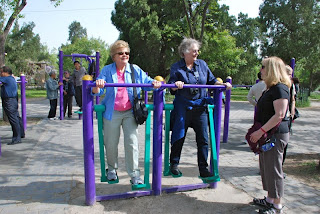 Most of the members of our tour group took part in at least trying out a few of the exercise machines. 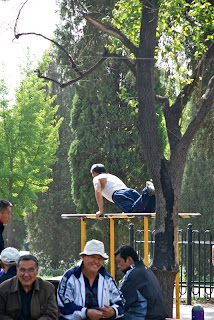 This man was waaaaaay too skilled!  He was going a beautiful routine on the parallel bars, and he was at least 70. 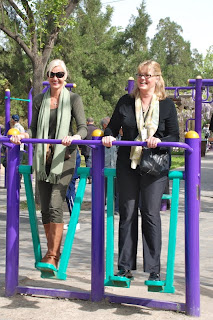 Rhonda and Debbie, from our group, tried out this sinister looking device.  I understand that if you weren't careful, you could end up practically doing the splits and really strain your legs! 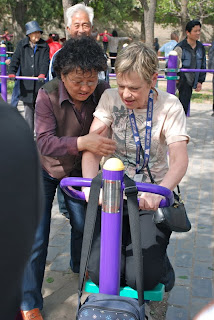 Here Carol was assisted by a nice lady in the proper placement of body parts for using this piece of equipment correctly.  All the local people were so willing to help us.  It was a lot of fun trying out the different pieces and interacting with the others. 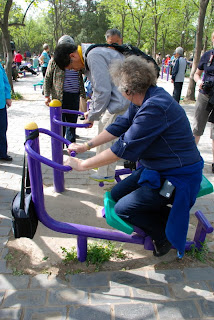 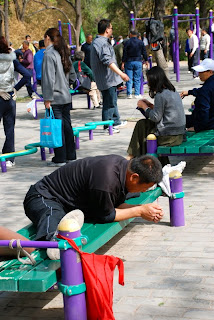 It became obvious that many people in this park were way too flexible.  I couldn't do what this man is doing in my youth, let alone now. 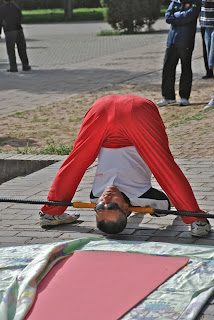 This extremely flexible and limber gentleman was around 75.  He is a local legend, not the norm, thank goodness!  He has students who come everyday to learn how to be as flexible as he, and they were all around, stretching and bending, according to his instructions.  Many of his students were ladies. 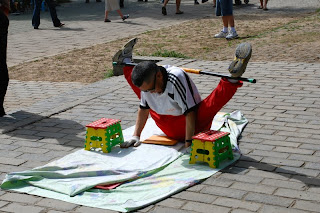 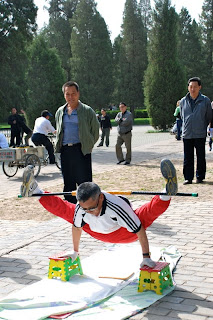 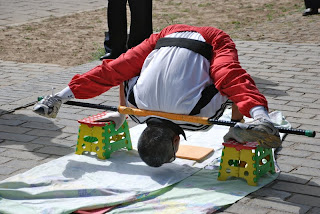 I needed a massage and an aspirin after watching this demonstration! 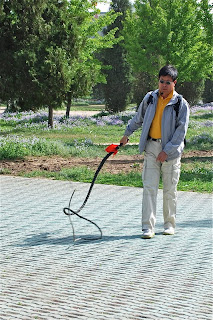 Our Beijing guide, Lian, used the bull whip.  He says it is very good exercise and while this whip was much longer than the one he is used to, he reported that he often trains with a whip at his local park as part of his fitness program. 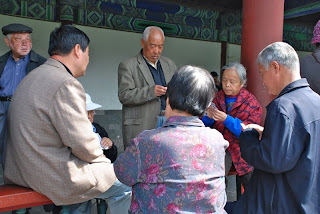 In other areas of the park you could see seniors playing cards and games. 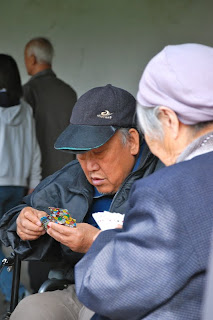 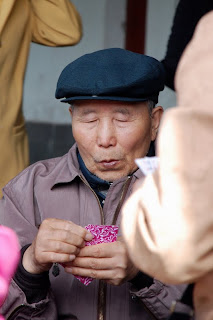 And the card players were serious, too! 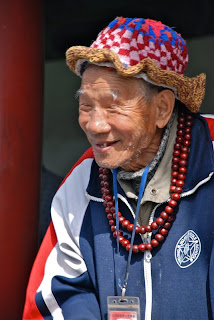 This elderly man sang and danced for us.

Besides card playing, there were groups of ladies knitting, embroidering and doing other handcrafts.  There was always someone there to assist if you were having difficulty with a stitch. 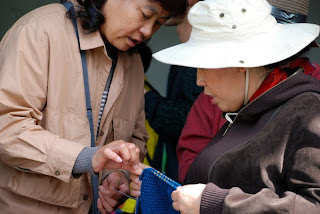 And in yet another area of the park was the "Granny Chorus."  This is a group of people, many of them older ladies, I gather, who come together to sing songs from the Cultural Revolution.  They are not a political group, but rather, an informal musical one.  The rousing patriotic songs from the Cultural Revolution seem like they would be fun to sing.  Obviously a lot of people come to join in and/or listen.  There was a very large crowd and everyone was singing at the top of their lungs.  (It was May 1st, International Labor Day and a national holiday.)  Fun!  I especially enjoyed the flag wavers.  Some of the flags were very large. 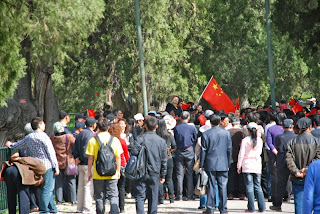 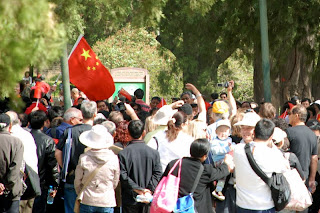 And, of course, there were beautiful specimen trees and plants all over the park.  It was a lovely place. 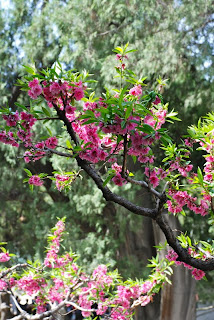 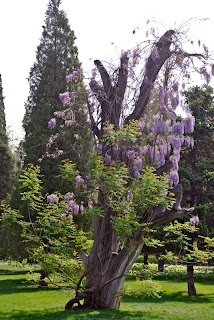 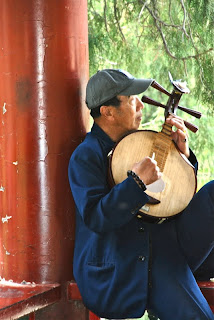 My very favorite memory was this man, who was playing a sort of lute (???), or whatever sort of stringed instrument it is, in a quiet corner of the covered pavilion in the park.  He played beautifully.
Posted by Michele R. Unger at 9:10 AM